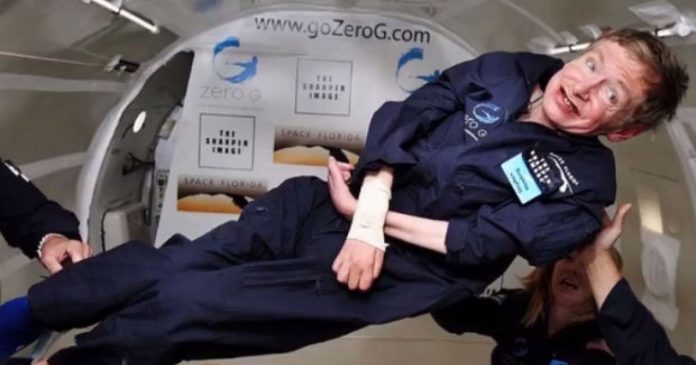 The future of air travel is evolving. At this moment in time, Virgin Galactic has a program preparing to send people into space, including Leonardo DiCaprio and Justin Bieber. Next year, for the low, low price of $250,000 and with the right training and health, rich people can travel into space for a short period of time and witness Earth from afar. Another landmark and popular option in travel coming up? Zero gravity flights.

According to USA Today, there’s a new business called Zero-G, the only company responsible for zero gravity flights. It allows passengers to feel the weightlessness experienced on the International Space Station and almost every movie you’ve ever seen set in space. The zero gravity experience occurs aboard a modified Boeing 727 named G-Force One, which amazingly, isn’t an homage to the Disney guinea pig action movie, G-Force. Passengers throw on their flight suits and for a total of 15 times, they experience the weightlessness of zero-g, allowing them to think they can fly.

There’s a whole lot of technical jargon involved, but in short, the pilot does a ‘lil acrobatic aerial maneuver known as a parabola. The pilot draws a lowercase “n” in the sky, starting with the nose of the pain towards space and then downward towards Earth. The maneuver happens well past 24,000 feet in the sky. The move to achieve zero-g was originally designed for the Apollo missions.

Piloting the plane is Erich Domitrovits, who’s done this more than 5,000 times. There’s no rookie in the pilot seat for this trip. Other celebrities who’ve experienced the Zero-G experience? Filmmaker Peter Jackson, Buzz Aldrin, Kate Upton, and of course, Ashton Kutcher. Again, it’s for rich people.

Las Vegas is where these zero-g flights are currently available. Famously, Stephen Hawking once took part in the flight, making for an incredible and iconic image of the man. Right now, the G-Force One departs McCarran International Airport and soars above Arizona to perform the parabola. There are two parabola moves performed. One allows passengers to feel one-sixth of their weight and, like Martian gravity, one-third of their weight.

Now you’re asking, how much does this all cost? Not quite an arm and a leg, but almost. It’s a priceless experience, in a way, so the high price tag is understandable. One spot on a Zero-G flight costs $5,400, plus a 5% tax. In addition to the eight minutes of weightlessness, there’s breakfast, lunch, and professional photos. For a charter flight and twelve seats, it costs $55,000. Finally, a private flight in Zero-Gravity costs $165,000.

Zero-G has already released their 2020 flight schedule, including a dozen stops across the United States. Before flying, it’s a must that passengers avoid greasy foods or anything else that’ll upset their stomach. Fill in the blank what happens when a passenger is floating and spinning in Zero-G with a belly full of Burger King. Not a pretty picture, right? Zero-G provides passengers with food beforehand designed for the experience, too.

Here’s where you can find the Zero-G flights this year: