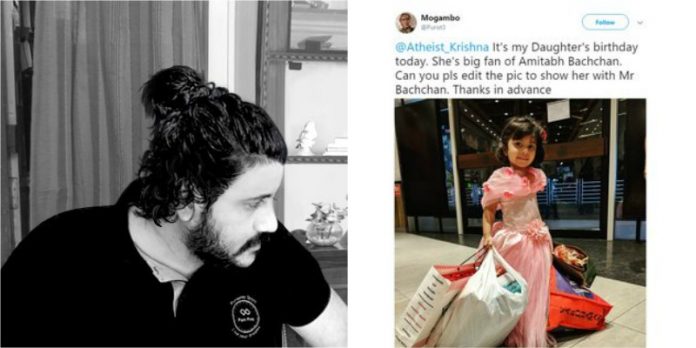 Radhakrishna Panga has become a really big name on micro-blogging application Twitter, where he is known as Atheist Krishna. He is one of the most popular content creators on Twitter with over 343k followers and is followed by many prominent people including Prime Minister Narendra Modi himself.

Also known as the Indian photoshopping wizard, Krishna is one of the great souls on Twitter who makes people happy and brings a smile on everyone’s faces using his photoshopping skills.

Krishna’s followers keep sending him requests to edit their photos and he takes requests and applies his magic to it doing exactly what people ask him. From leaving us in splits with his photoshopping skills to making us go in awe of his pictures, Krishna ‘s tweets never fail to go viral on social media.

Recently, a Twitter user asked Krishna’s help to make his daughter’s birthday more special for her. The twitter user shared an adorable picture of his daughter carrying a lot of shopping bags. He requested Krishna to add a picture of Amitabh Bachchan with his daughter as she is a huge fan of the actor.

Requesting Krishna to edit the picture, the Twitter user wrote: “It’s my daughter’s birthday today. She’s a big fan of Amitabh Bachchan. Can you pls edit the pic to show her with Mr. Bachchan. Thanks in advance.’

Krishna was quick to notice the tweet. And soon he posted the picture after doing his magic on it. Here, check ot Krishna’s Tweet:

“Thank you very much! Hugely appreciated! Daughter was so happy to see this ????“

Twitterati are all praises for Krishna and his skills. Here, check out his reply:

Thank you very much! Hugely appreciated! Daughter was so happy to see this ????

@SrBachchan sir you must see this.

Krishna. You are spreading love. Kudos to you bro. Wish you love luck and lots of ????.