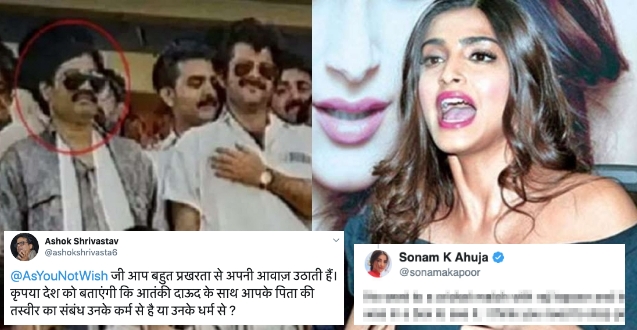 Actress , Sonam Kapoor , is very popular for style statement but is often trolled by netizens for her upfront attitude . . This time , she being trolled for one of the old picture of her actor-father Anil Kapoor standing beside Dawood Ibrahim. The actress gave a savage reply to the trollers ..

Regarding the incident of the Shaheen Bagh and the Jamia Millia Islamia University, Sonam took to her twitter handle and posted“This is something that I never imagined would happen in India. Stop this divisive dangerous politics. It fuels HATE. If you believe yourself to be a Hindu then understand that the religion is about Karma and dharma and this is not either of those.”

Replying to it, she tweeted, “He went to a cricket match with raj kapoor and krishna Kapoor. And was in a box to see it. I think you need to stop pointing fingers and there are three that point back at you. I hope lord Ram can forgive you for being evil and spreading violence (sic).”

Sonam also too to her Insta account and posted that she never quoted anything about the ongoing scenario of JNU riots , as she has thought that it would not be the right thing to poke in the matter of government but she said that ultimately , she expressed her views what she felt was right.