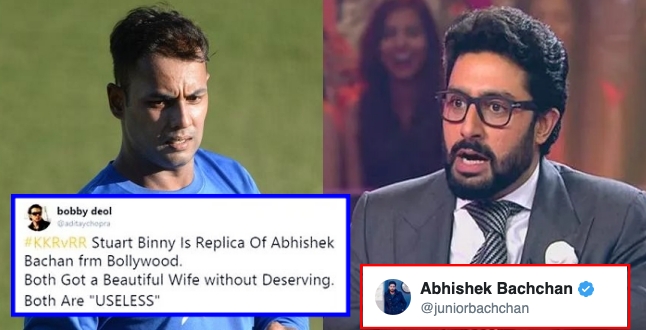 While being a celebrity has its perks, it also calls for social media trolls keeping an eye on every move of yours.

Indian all-rounder Stuart Binny is no exception and is often trolled for his personal and professional activities.

Stuart, the son of former Indian cricket Roger Binny is often baselessly trolled for his cricket and various other things. Even since he failed to do well in IPL-11, Binny has been facing the wrath on the social media.

From trolling him for his performance to mocking him for having the top anchor as his wife, the trollers are leaving no stone unturned to show their disappointment from the cricketer.

In a brutal case of trolling, he stated that both these personalities got beautiful wives without deserving and broke into their respective fields because of their fathers. He went on to break all barriers by terming them ‘useless’.

The tweet read:
“#KKRvRR Stuart Binny Is Replica Of Abhishek Bachan frm Bollywood.
Both Got a Beautiful Wife without Deserving.
Both Got into Movies/ Cricket Because of their Father.
Both Are “USELESS”
Retweet ????if you Agree.”

In response to his tweet, Junior Bachchan asked him to ‘get well soon’ which put the troll right in his place.

Abhishek wrote,
“Walk a mile in my shoes, brother. If you even manage 10 steps I’ll be impressed. Judging by your tweets don’t think you’ll make it too far! Spend time improving yourself, don’t worry about others. God knows, we all have our own journeys. Get well soon. ????”

The befitting reply from the ‘Guru’ actor made the user realize his mistake and he wasted no time in coming up with an apology.

“Ab that was just for funn.. Ur one of the koolest person, even I have seen tera jadu chalgya in theatres, I like the way u dress in suits, that was a joke and apologies if you feel bad, I agreed the pressure you or Sachin Tendulkar’s son has no normal person can bear.. Apologies.”