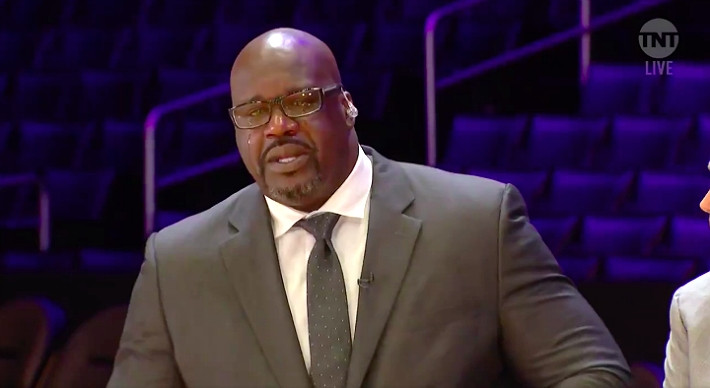 The Los Angeles Lakers and Clippers were scheduled to play a game at Staples Center on Tuesday night, a matchup that was postponed in the wake of Kobe Bryant’s tragic death in a helicopter crash on Sunday. Instead, an emotional tribute from former Laker Shaquille O’Neal gripped the NBA world as the now-broadcaster spoke about the death of his friend and ex-teammate.

TNT aired a special pregame show at Staples Center on Tuesday showing many of the tributes made across NBA arenas by other teams and players. One of the most emotional moments came from Shaq, who was visibly shaken but wanted to make a statement about the loss of Bryant and the impact other losses have had on his life.

“The last couple months have been really tough. I lost my little sister. Haven’t been doing the things I usually do. I work, we laugh, we kid, we joke. When I get back home I look at reality and say she’s gone and it hurts,” Shaq said, then retold how he found out about the news. “So the other day I’m down stairs working with my son Shaqir and my nephew Columbus and my other nephew comes in crying and he shows me his phone and I snapped at him. I said, ‘Man get that out of my face.’”

O’Neal’s skepticism about the news was shared by many, and he said he didn’t believe it when word spread that Bryant had died.

“We live in a world where where anything can be photoshopped. Anything can be hoaxed. I didn’t want to believe it,” he saidd. “And then I got the call from you, Charles, Kenny. Everybody called me. And then we found out it was confirmed. I haven’t felt a pain that sharp in a while.”

Shaq had already called Kobe a “little brother” and said it again on Tuesday, adding him to a list of family members he’s already lost in his life.

“I lost two grandmothers, lost a Sarge, lost a sister. And now I lost a little brother,” he said. “Our names will be attached together for what we did, people always asked about our relationship and I tell them it’s just like me and Charles. We got two strong-minded people who are going to get it done that way, gonna say certain things, the respect will never be lost but when it comes to be inside the lines and win, thats’ what me and him, thats’ what we did. That’s what me and Charles, that’s what we do.”

He continued, describing the minutes after first realizing that Bryant was gone and the initial rumors, reported by some but later retracted, that Rick Fox was on the helicopter, too.

“It was sort of like a triple stabbing to the heart. Because after you cry and wonder about that, then I get back on the internet, Rick Fox is on the plane. Then I’m sick even more. I’m calling Rick, he’s not answering. So now I’m like, what’s going on,” Shaq said. “And then, the final blow. His lovely daughter was with him on the helicopter. You know, every time I saw his lovely wife and his kids, same thing I do with D-Wade’s kids, with Kenny’s kids: ‘Hi, I’m uncle Shaq.’ I don’t know if they know me as a basketball player. It doesn’t matter. Hi. I’m uncle Shaq. I try to make them laugh.”

He was emotional throughout the segment, tears running down his face while Johnson consoled him. To see such a legendary figure break down on live TV was heartbreaking, but yet another indicator of how impactful Bryant was in the league and the devastation his sudden loss has caused.