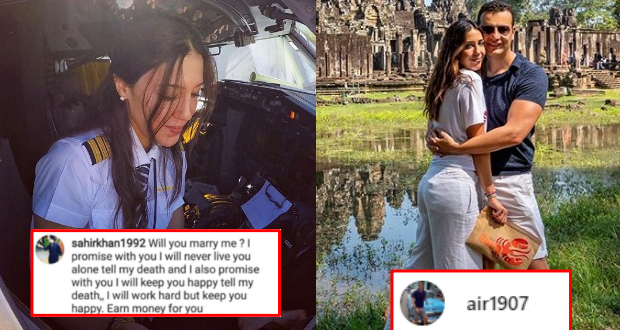 Hello people!! today , we are going to make you aware of one of the hilarious incident happened , where a desi man proposed a Dutch pilot and the response he got was epic .

This happened when a desi man fell in love with one of the picture , which the pilot named Eser Aksan Erdogan posted on her Instagram handle , she is seen with a lovely smile in her uniform and posing the camera.

See her picture below:

The social media user named Sahir Khan , commented on her picture and letting her know about his love . But the comment he did may lead you in a great laugh.

Now the twist comes in the story, he got another user who appreciated his comment and said , It’s inspiring. To this comment Sahir Khan says that he is in true love with the pilot and also asks the social media user air1907 , if he could help him regarding the same .

Yes guys , you heard it right .. and that’s what the pilot revealed in the series of comments .

After apologizing for his comment , now comes the master stroke of Sahir Khan, as he asks the gorgeous pilot that if she has any sister?

This love confession was really a hilarious one . What say guys? Do share your views in the comment section below.