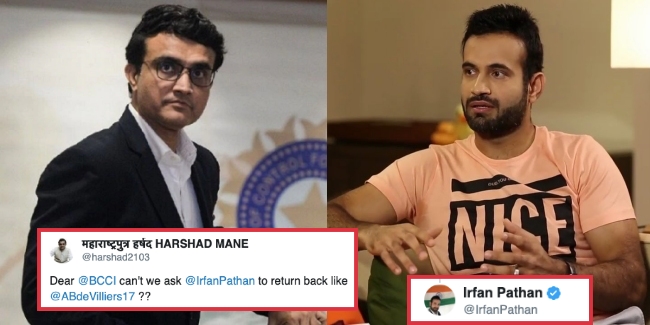 It was January 4, 2020, when the pacer turned all-rounder, Irfan Pathan announced his retirement from cricket. Pathan made his cricket debut in 2003-04 on the tour of Australia.

But due to some form issues and injuries, Pathan lost his place in the team and his final appearance for Team India was in October 2012, when he was just 27 years old. His last FC match came for Jammu and Kashmir in February 2019 and he last played in IPL for Rising Pune Supergiant.

But he is currently a part of the ongoing Road Safety World Series 2020 where he plays for Sachin Tendulkar’s team, India Legends.

On March 10, Pathan created magic on the pitch when he smashed 57 runs in just 31 balls and shouldered India Legends to victory against Sri Lanka Legends.

After the match Pathan’s fans took over the internet, asking the national team selectors and the BCCI to bring back Pathan in the Indian Team.

One fan even reached out to the BCCI’s official twitter handle and requested them to make Pathan come out of retirement and play for India.

He wrote, “Dear @BCCI can’t we ask @IrfanPathan to return back like @ABdeVilliers17 ??”.

Pathan himself replied to this fan’s tweet. He replied, “Haha too late I guess.”

I’m sure his answer would’ve absolutely broken his heart into tiny pieces.