Home Internet 9 Popular Indian Celebs who Ran Away from Home and Married Against... 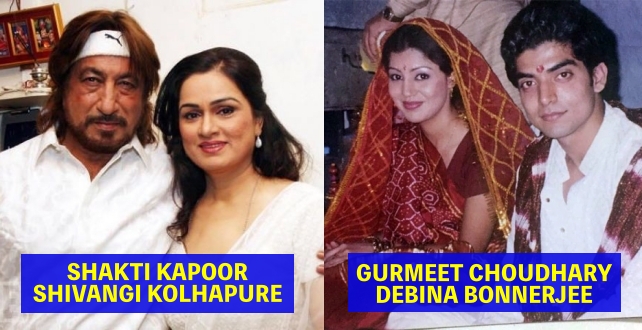 For most celebrity weddings, there’s a lot of planning involved: huge dresses, exotic locations, fancy food and a guest list as long as your arm. But while some stars decide to go all out for their big day, other couples take the opposite route: escaping to a private place, keeping it casual and only inviting close family and friends — if they decide to tell anyone at all.

When you’re famous, eloping can have a lot of perks. You can avoid press coverage and prevent uninvited acquaintances from feeling snubbed, not to mention save a lot of cash. It can also create a super-special, super-intimate ceremony that the two of you will remember forever.

Let’s look at some of the biggest celebrity pairs that have said “I do” secretly — or at least without making it a big deal.

Aamir Khan ran away with his childhood sweetheart, Reena Dutta. The actor proposed his love, Reena (next-door neighbour) the day he turned 21. Aamir is a Muslim and Reena was a Hindu so the family drama was expected. Thus, Aamir in the typical filmy style eloped with Reena and got married on April 18, 1986. Things changed with time and after 16 years of marriage, the couple parted ways. While Reena is a single mom to his 2 kids, Aamir went ahead to tie the knot with Kiran Rao whom he met on the sets of Lagaan.

While filming for ‘Aisa Pyaar Kahan’, actress Padmini and producer Pradeep Sharma aka Tutu Sharma came closer and fell for each other. But Padmini’s parents were against their relationship, and so, Padmini and Pradeep who kept denying their relationship then eloped and got hitched on August 14, 1986 that too at their friend’s place. They are still going strong and love is keeping them together! They have a son, and are all set to celebrate 34 years of their marriage this year.

Strange right? JP Dutta who makes war films is a die hard romantic person in real-life. JP fell in love with then leading actress, Bindiya. Bindiya was already married and was the second wife of Vinod Mehra. However, their marriage didn’t last as the actress fell in love with JP Dutta. So, the couple eloped and got married.

Shashi Kapoor was a part of Prithvi Theatre, while Jennifer Kendal was associated with Shakespeareana. Their mutual interest in theatre brought them together. They first met in Kolkata in 1956, and fell for each other after a few meetings. When they decided to take the big plunge into marriage, Jennifer came across a huge obstacle – her father didn’t approve of this relationship. So, she ran away and came to Mumbai to get married to Shashi in a traditional Indian ceremony, in July 1958. Jennifer died of cancer in 1984.

Shammi fell for his Rangeen Raatein co-star Geeta Bali’s beauty and charm while they were shooting for the film in ‘Ranikhet’. He confessed his love to the lady and kept trying to convince her to marry him. The actress took four months to finally come to a yes. Since Geeta was a year older than Shammi, the latter thought his family wouldn’t accept their relationship, so the duo eloped and tied the sacred knot at Mumbai’s Banganga temple, in 1955; with filmmaker Hari Walia as the witness. After ten years of togetherness, Geeta died of smallpox in 1965.

You must have heard of this “Maine Pyar Kiya” actress? She was not just a Bollywood actress but was also a royal princess, who got proposed by her school-time love, Himalaya Dasani. The actress hails from a prominent Patwardhan, royal Marathi family of Sangli and her father is the Raja of Sangli. So, they were against the match, but the lovebirds eloped and took their school time romance to the next level and got hitched eventually. She was just 21 years old at that time.

He is known for playing evil characters, often with a comical twist, though he has also played positive comic roles in a few movies. Shakti is married to the beautiful Shivangi Kolhapure, sister of yesteryear actress Padmini Kolhapure. Shivangi played a brief role in her only film ‘Kismet’ (1980) which also starred Shakti, and it was love at first sight for them. They dated secretly for two years from 1980 to 1982. Shivangi’s family opposed their relationship, so the couple eloped and got married in 1982.

Actress and dancer Sudha Chandran is one of the famous celebrities in the industry. Sudha met associate director Ravi Dang and it was love at first sight for her. But her family opposed this union. She was the only child of her parents and they wanted only the best for her. After so much of convincing game, the duo finally ran away and tied the knot.

Did you know the couple actually got married way before they made it public? That’s right! Debina and Gurmeet eloped and got tied the knot at a temple in Mumbai in 2009 before making it known to their family as well as the public in 2011. The beautiful couple has been together for more than a decade now and are still going strong as ever.

Gurmeet himself had said, “A lot of people think that I and Debina met while filming for Ramayan, and then we got married in 2011. Very few know that when we were nothing, we weren’t actors, we were only looking for work – we were just 19 and 20 years old, we eloped and got married, in 2006. We did not tell our parents. Our friends helped us to get married at a temple in Goregaon.”