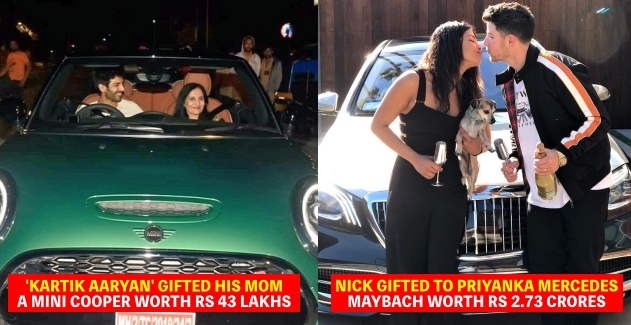 Extravagant and pompous in every aspect, life in Bollywood is better lived king size. In an industry where star power and clout is weighed by the display of wealth, it is not uncommon for actors to flash their cash at every given opportunity.

However, it turns out that B-town celebs have not been splurging all the money on themselves.

Here are some ridiculously expensive cars given by Bollywood celebs to their loved ones, which will leave you feeling extremely poor.

Kartik Aaryan is indeed the ideal son as he gifted his mother the perfect birthday gift on her 43rd birthday. He gifted his mother a swanky green-emerald Mini Cooper worth Rs 43 lakhs. Kartik’s mother had expressed her liking for the car long ago. Kartik had promised to fulfill his mother’s desire once he’d become an established actor in Bollywood.

Well, everyone in Bollywood knows Sanjay Dutt’s generosity when it comes to gifting, especially to the ones he loves. So when it came to his beloved wife, it had to be something very special. He gifted his wife a Rolls Royce Ghost worth Rs 6.21 crore. Baba definitely knows how to keep his wife happy.

Ask Nick Jonas how to spoil a girl and he will have the best answer. Priyanka’s pati gifted her a black Mercedes Maybach s650 after the success of his song Sucker in which PeeCee was featured enjoying a glam bath. The car is estimated to be around Rs 2.73 crore.

Taking relationship goals to the next level, producer Aditya Chopra gifted Rani Mukerji a brand new Audi A8 W12 worth Rs 2 crore. This was way back in 2012 when the love birds were not even married.

Akshay Kumar is another popular star who marked his wife Twinkle’s birthday by presenting her a Bentley Continental Spur, one of the sportier luxury car model from the Bentley stable. The car is worth Rs 3.4 Cr. The gift had come at a time when rumours about his alleged affair with Priyanka Chopra had hit the news stand.

It’s everybody’s dream in Bollywood to work with the legendary actor Amitabh Bachchan someday. When Vidhu Vinod Chopra finally got lucky and got a chance to work with Mr Bachchan in his production, Eklavya, Chopra couldn’t stop himself from showing a touching gesture which costed him roughly around ₹ 9.50 crores! Chopra gifted Bachchan Sr, a brand new Rolls Royce Phantom which the actor graciously accepted.

And Amar Singh gifted him the Bentley Continental GT priced at Rs. 3.12 Cr.

Shahrukh Khan is one of the prolific gifters in Bollywood and the actor gifted director Farah Khan a Mercedes GLS-Class SUV worth Rs. 88 lakhs on her birthday.

It seems Bollywood stars are not just obsessed with buying expensive stuff for themselves but also for their loved ones.

BRB, feeling gareeb and need a tissue to wipe all those tears!