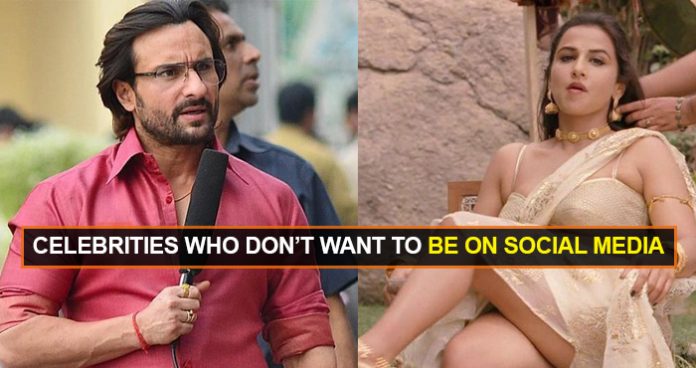 Celebrities love social media. It’s their platform to connect with friends and fans. Social media has almost completely taken over our lives, right? No matter what we do, even if it is something as simple as going for a walk, we feel the need to record it on social media. In fact, celebrities are the ones who start social media trends. Gym selfies, travel diaries, cheat day food pics, OOTD posts – these were all a celeb’s doing. And now, even our social timelines are full of them. Moreover, for them, it is a means of reaching out to their fans. A large number of stars have accounts on all social media platforms and are quite active on them.

While most celebs cannot get enough of social platforms, take for example, Disha Patani, there are some who avoid it altogether. After all, social media has its advantages and disadvantages. Some celebs like to keep their lives private, some want to stay away from Internet trolls, while some are simply shy.

So, herewith find a few celebrities who are not active on social media but aware of all the trends going on..

Our beloved, Kareena Kapoor khan prefers to remain hidden from social media as she loves to keep her personal life private from the public. Being old school, she stays away from the scathing glare of social media.

Rekha, being all-time favorite actress of Bollywood is not active on social media yet. Rekha does not have a social media page or a social media account. The media people provide her news, whereabouts, and activities. The beauty legend has always been very classy, and we can’t wait for her charisma on any of the social media platforms.

Lately, Jaya Bachchan has been very active in politics as she’s a member of Parliament in Rajya Sabha and runs for the Samajwadi Party. Apart from this, we don’t really know what’s happening in her personal life. It would be appreciated if all the members of the Bachchan family make their presence known on social media.

Vidya Balan, a bold and beautiful Bollywood star who speaks her mind is not aggressively active on social media. As per the reports, she hardly spends 5 minutes on social media and is not addicted to any social platform and likes her personal space too much

Kangana is a bold Bollywood actress and has a way to get back at the media. Kangana has always been private about her life and handles controversies very positively. According to the young actress, she has a lot of things to invest in so she cannot engage with millions of people on an hourly basis.

I am inactive so I don’t miss it (social media) but what I definitely see… Certainly one of the good things about such mediums is that you can actually clarify your stand when you are sort of facing rumours and misunderstood. The bad things is that you are susceptible to all kinds of nasty trolls and frustrated people who are just out to show their frustration regardless of whosoever it is and you get subjected to that sort of hatred which is inhuman.”

Just like his wife, Saif is also protective of his personal life and prefers not to show it off to social media. But his fans always wanted him to be active on social platforms to that they be in touch with him.

Charming star of Bollywood, Ranbir Kapoor is one actor who has always kept away from social media but in conversation with Rajeev Masand he reviled that he is secretly on popular photo-sharing app – Instagram and that his personality is of somebody who’s very shy; and a bit introvert.

Imran Khan, a Bollywood actor, had a social media account but de-activated his account as there were too many people trying to troll him. The fans were upset that he gave up social media and still hope he gets back on social media.