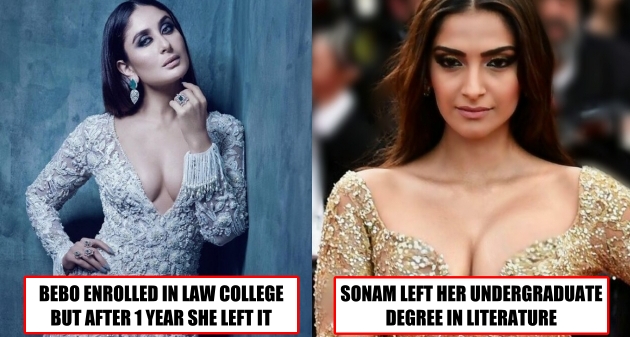 Education is an important part of one’s life. Schools and colleges are deemed as very important parts of our lives. But equally important is one’s career which gives practical exposure and real problems to deal with!

Whether education is more important than career is a debatable question. But the real dilemma comes up when one has to choose between education and career.

We have a number of Bollywood actresses who have more often that not face this dilemma. Here are the names of 9 actresses who chose their career over their education and dropped out of school/college:

After her +2, Alia decided to focus on acting. So she rather visited sets to learn acting and film-making techniques than enroll herself in a college.

She was first studying commerce from Mithibai College! Then she joined Government Law College to study law! She dropped out a year later to pursue acting!

She enrolled in Mount Carmel Bangalore but had to discontinue college to focus on her modelling career. Later she had enrolled herself in IGNOU, but could not continue that either, thanks to her busy schedule.

Katrina had to move from one country to another very frequently, since her mother had dedicated her life to social causes. As a result, she could never continue in a school. She left everything and started modelling at the age of 14!

One of the most beautiful faces in the world, Aishwarya Rai Bachchan is a college dropout too. Aishwarya had always been an average student. She went to Jai Hind college for a year but later switched to some other college to pursue architecture. Soon she was offered many high-end modelling assignments, and film offers. Thus she left her studies mid way to join the Bollywood bandwagon.

One of the most sought-after actresses of the decade, Priyanka never finished her graduation. The beauty queen has done her schooling from some places like USA and India. She wanted to be a criminal psychologist and joined Jai Hind college in Mumbai. But modelling and beauty assignments came her way too soon.

Sonam Kapoor has established herself as a successful actress in Bollywood Industry now, but did you all know that she’s a dropout too? She left her undergraduate degree in literature to join Bollywood! She still regrets her decision!

Karisma Kapoor is one of the most popular and successful actresses of her time. She entered Bollywood when she was just 16. It’s said that she dropped out of school after entering the 6th standard for pursuing a career in the film industry.

She lost interest in studies when she failed in Chemistry in 12th standard. She gave up her preparation for All India Pre Medical Exams and ran to Mumbai to become an actress!