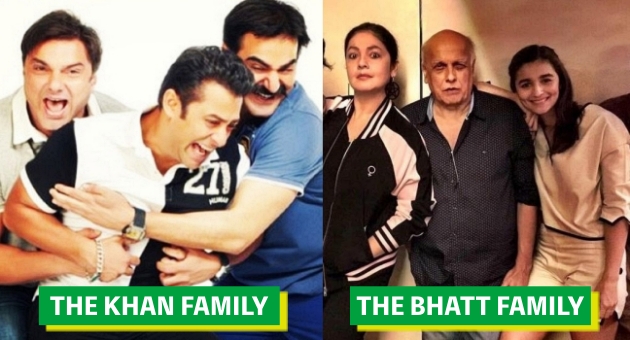 Bollywood is vast name in itself . Where on one side , it has many budding actors who are proving themselves in the era and becoming popular , on the other hand , there are the Bollywood families who are taking forward their generations in acting .

The Bollywood journey of the heritage was begun by Prithviraj Kapoor who came to Mumbai to satisfy his fantasy of being a piece of Hindi motion pictures. After that, Raj Kapoor, Shashi Kapoor and Shammi Kapoor led the cinema with great hits . Also , Raj Kapoor’s children Randhir, Rajiv and Rishi Kapoor started their career in the same and Rishi Kapoor was the most successful in them . Following the footsteps ,Karisma Kapoor went ahead and showed her talent to the audience . After Karisma, its more Kareena and Ranbir Kapoor , who are right now the most popular ones of the family.

The family , which is filled with talented actors . From Big B to Abhishek and the stunning beauty Aishwayra Rai Bachchan and how can we forget the versatile Jaya Bachchan . The exception of Shweta Bachchan is always there as she did not enter the Bollywood industry . With great fan following , comes the Bachchan family..

Anil Kapoor made his own identity in the film industry. His daughters Rhea Kapoor is in the film business but is not an actress. Whereas Sonam Kapoor is an established actress. His son Harshvardhan Kapoor is a budding actor.

Boney Kapoor is a well known and established movie producer. His wife, Late Sridevi Kapoor was a popular actress of her time. Their two daughters, Janhvi Kapoor is already doing her first film whereas Khushi Kapoor is yet to enter the industry. From his previous marriage, Boney Kapoor has two kids, Arjun Kapoor and Anshula Kapoor. Arjun Kapoor, as we all know is a popular actor whereas Anshula has kept her off film world.

The Director Yash Chopra and his movies have earned a lot of fame and respect for him in Bollywood. He has created some of the finest movies in Indian film industry. His son Aditya Chopra is also a filmmaker and Uday Chopra is an actor.

Salman Khan’s family is a star-studded too. Salim Khan, father of Salman Khan is a form actor and scriptwriter. He has four children from his first wife, Salman Khan, Arbaaz Khan, Sohail Khan, Arpita Khan, Alvira Khan Agnihotri. Arpita was adopted. All of the three sons are established, actors. Salim Khan’s second wife, Helen was an actress too.

Mahesh Bhatt is a well-known filmmaker, Soni Razdan is a British born former actress and their daughter Alia Bhatt is one of the shining stars in the film industry.

Sharmila Tagore, mother of Saif Ali Khan has been a popular and established actress during her time. Both Saif Ali Khan and Soha Ali Khan have made her name in the film industry and have done many movies. Saif’s wife Kareena, is a beloved actress in the industry as well.

The families are taking the talents and acting skills from one generation to other making a great fan following ..

Which one is your favorite ?? do let us know in the comment section..