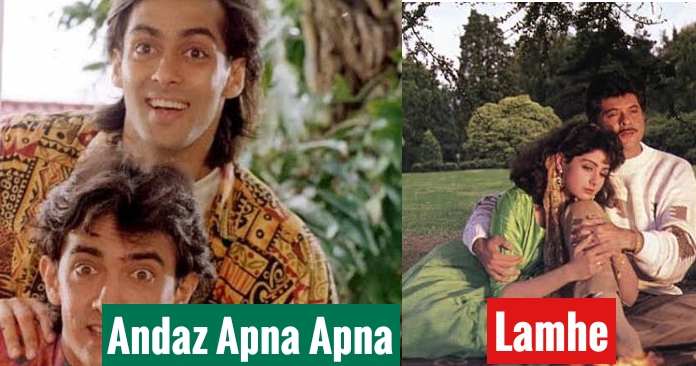 Bollywood film industry has seen lots of hits and flops over the years. The world of cinema is unpredictable and the success too. While sometimes things work out, sometimes it doesn’t. No matter how good or bad the film is, it’s the audience who decides its final fate.

When we look at the bunch of films released over the past few decades, many were actually declared a flop when they were released but became a huge hit among the viewers later on. It’s strange, isn’t it?

So, here’s the list of 8 Bollywood films which tasted the success quite a while after they released:

It was a multi-starrer comedy film starring Salman Khan, Aamir Khan, Raveena Tandon and Karisma Kapoor. All four of them were the biggest stars of that time. However, the film did not impress the viewers during its release. Interestingly, every character of this film is very unique and that is what made this film a loved one among the viewers quite sometime after its release. It has been labeled as a cult classic of all times and is also being considered for a remake too.

The film starred Bollywood’s Tragedy Queen Meena Kumari, in the lead role. Pakeezah was declared as a huge flop because it took 14 long years to complete this film. Pakeezah was Meena Kumari’s last film and it only gained popularity after her tragic death. Interestingly, it is considered as one of the classic films of the Hindi film industry.

It will be hard to believe if anyone says that they haven’t watched this film even once in their life. The film received a terrible response during its first two weeks which made director Ramesh Sippy consider reshooting the climax so that Amitabh Bachchan’s character could be shown alive. However, with the addition of the soundtrack release and other things, Sholay became a sensation.

The Mani Ratnam directorial was the first Indian film to enter the Top 10 in the UK Box Office charts. The film bagged 2 National Film Awards and 7 Filmfare Awards. From the excellent soundtrack to the wonderful star cast, Dil Se is one of the classic movies of the Bollywood industry. Who would have thought a film like that could be a Box Office disappointment? But that didn’t change anything.

The showman of Bollywood- Raj Kapoor’s films are always to look forward to. Mera Naam Joker was an extremely special film for Raj Kapoor and it took him 6 long years to make this film. Not just this, he invested a fortune in making this film. Mera Naam Joker’s story will leave you teary-eyed every time you see but it was a catastrophic disaster. But sometimes, it takes time to realize the worth of certain things and the same happened with this film too.

Amitabh Bachchan starrer Agneepath was declared a huge flop when it released.  The film’s story was inspired by a poem of the same name written by Big B’s father, Harivansh Rai Bachchan. Amitabh Bachchan’s experimentation with his voice in the film where he tried to copy Marlon Brando in The Godfather did not go well with the audience or the critics. However, after bagging the National Award people started looking at Agneepath in a different way.

Lamhe was Yash Chopra’s personal favourite among the dozens of films he had made. Legendary actress Sridevi’s double role in Lamhe made her win several accolades. The film performed well in the UK, however, it did not get the deserved response in India due to a theme that was considered subtly incestuous among the viewers. But with time, the mindsets of people changed and Lamhe went on to become a classic film of all the time.

With a stellar star cast of Amitabh Bachchan, Jaya Bachchan, Shashi Kapoor, Sanjeev Kumar and Rekha, Silsila had raised the expectation levels of the audiences. The film’s story is based on the love triangle between the three lead characters, Amitabh Bachchan, Jaya Bhaduri and Rekha. It was one of the best romantic films ever made by Yash Chopra, however, it took a lot of time to make way to the audiences’ hearts.

Well, these were just a few ones but there are lots of
masterpieces hidden whose worth was only realized later and people rave about
time and again.