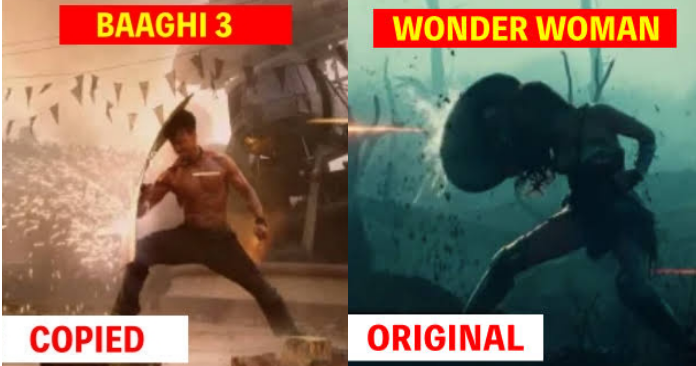 Maybe we don’t admit it more often, but its a fact that nowadays every filmmaker in Bollywood is blamed for either copying content from great films or they just tear out some really iconic scenes from blockbuster international films. Recently films like Baaghi:3 have been confronted and accused of plagiarism and ripping off some great scenes from American films.

So without further due let’s have a look at those Hindi films which left fans in the state of Deja Vu.

The trailer of Tiger Shroff’s new film “Baaghi 3” just released some days back and it has already been accused of plagiarised content in its film. There may be some great action scenes in the film, but one such scene reminds us of a scene from DC’s “Wonder Woman”. In the trailer we saw Tiger Shroff holding a car door to protect himself from firing, interestingly this epic scene was the same as a scene from “Wonder Woman” where she uses her shield to protect herself.

2. Bhoot Part One: The Haunted Ship copied a haunted scene from Lights Out

Vicky Kaushal’s next film which is his first horror film “Bhoot Part One: The Haunted Ship” is very much liked by the viewers. However, fans noticed that the eerie scenes from this film are somewhat the same as that from the Hollywood horror flick “Lights Out”. They pointed out that the creepy hand scene is the same as the climax scene from Lights Out.

Even though this film had a massive budget, still this film failed to have an original plot and the team was heavily criticized for it. Even the posters were trolled as seemed to have various similarities to Hollywood films. Not only the plot was said to be plagiarised and copied from the film “Largo Winch”, they even copied some scenes from the film and did not add their originality to it. But anyways this movie became a hit on box-office because of the Baahubali star, Prabhas.

4. Baahubali 2 copied scene from Batman vs Superman: Dawn of Justice

Though the Baahubali film franchise is the biggest film in the history of Bollywood, if we look into it we cannot deny the fact that some inspirations for this film are copied from other Hollywood projects. Among the many scenes, there is one scene in which the villagers reach out and touch Baahubali while he crosses them. This scene is the same as that of Batman vs Superman: Dawn of Justice where everyone reaches out to touch Superman for saving them.

This cop-franchise film was a remake film which went successfully on the silver screens. But this action-packed movie also did snatch out some scenes from the film “Red”. There is a scene in Singham where Ajay Devgn casually walks out of his moving car to shoot the goons. This is similar to a fighting scene from Red where Bruce Willis steps down his moving car to shoot his enemies.

6. Barfi copied a Charlie Chaplin scene from The Adventurer

Barfi is surely by far Ranbir Kapoor’s best work and was a lovely film indeed. But there was a scene in this film where Ranbir tries to avoid the police officer through a sliding door. After a lot of thought viewers realized that this scene is the same as a scene from Charlie Chaplin’s short film”The Adventurer” from 1917 where Chaplin does the same thing to dodge a police officer.

The climax scene from Vidya Balan’s thriller film “Kahaani” which shocked the viewers was not at all an original idea. In fact, that scene was inspired by Angelina Jolie’s 2004 film “Taking Lives”. But without that also the film had the best plot twists and storylines which one couldn’t have imagined.