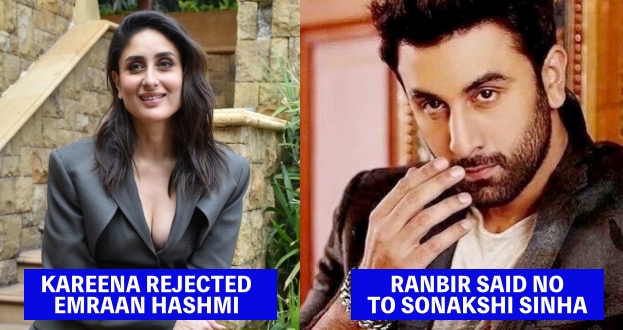 Many a times , we have seen the reel life of the celebs where they are fighting , romancing and what not .. It’s in the real one where the clashes come forward .

Today , we bring you some of the actors who denied for the film just because of their co-stars .

Let’s have a look at them :

Kareena Kapoor Khan , who is also known for her witty acting … At the start , she revealed that she would be performing only with the actors who are in the A list of the certification . But later when she was asked to sign the film of KJohar which is ‘Badtameez Dil ‘ but Bebo just walked out of the film as his co star was Emraan Hashmi ..

Ranbir Kapoor once turned down a romantic comedy in which he was supposed to share the screen space with Dabbang star Sonakshi Sinha. According to Ranbir, Sona looks way too older than him and starring opposite her would make him look young. Rumors have it that Kapoor suggested the name of another actress for the role but when the producers refused, he chose to walk out of the film.

Before Sidharth Malhotra, Ranveer Singh was offered the role opposite Katrina Kaif in Baar Baar Dekho. However, according to the gossip mill, Ranveer turned it down in order to not offend his lady love Deepika Padukone. Apparently, Deepika and Katrina didn’t get along well with each other owing to their history with Ranbir Kapoor.

Remember the time when Emraan Hashmi called Aishwarya Rai Bachchan “plastic” on Koffee With Karan’s infamous couch? Well, seems Aishwarya never got over that! According to reports, Aishwarya refused to star in Baadshaho when she learned that Diljit Dosanjh has been replaced by Emraan Hashmi.

The Fitoor stars Katrina and Aditya Roy Kapoor was once in a clash to be casted opposite each other . When Kat was not at the good times in her career she denied to be casted opposited Aditya Roy Kapoor because he was also doing the tit-bits at that time . Katrina was seen with Aditya in Fitoor (in 2016) that was a dud at the box office. She had also broken up with beau Ranbir Kapoor around the same time and rumors of Aditya’s closeness to Katrina were doing the rounds. However, after the success of her film Tiger Zinda Hai, Katrina had become very selective in choosing her films and Katrina was not quite sure about their onscreen chemistry after delivering a flop with him.

The iconic role of Mastani in Sanjay Leela Bhansali’s Bajirao Mastani was initially intended for Aishwarya Rai Bachchan. However, the beauty queen dropped out of the role after she it was heard that Bhansali was planning to cast Salman Khan as Bajirao. We all know about the bitter relationship of Aish and Salman .

We all know about the film ‘Black’ , where Rani Mukherjee and Big B played a superb role . Initially, Kareen Kapoor Khan was in the mind of the director Sanjay Leela Bhansali for the role which Rani did later but Bebo denied to be the part of the movie .It was speculated that they have bitter relations after the engagement of Abhishek and Karishma was called off.