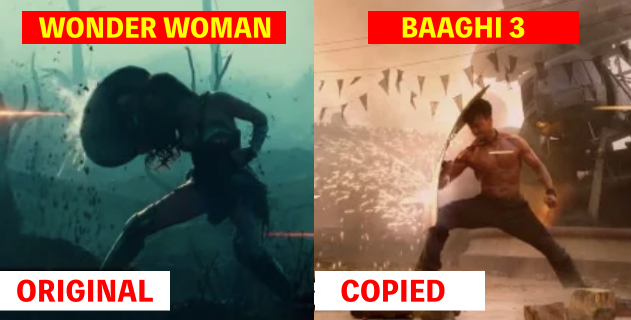 When it comes to the action sequence of Bollywood movies , audience just enjoy them , while watching their favorite actors in the movie .

But do you know many hit movies take their inspiration from
Hollywood movies , where actions and scenes are just copied as they are shown in foreign .

With the latest films including Tiger Shroff’s ‘Baaghi 3’ and ‘Vicky Kaushal’s ‘Bhoot Part One: The Haunted Ship’ being accused of lifting scenes from popular American films.

Let’s have a look at those action packed and other scenes :

Tiger Shroff launched the new trailer of his film ‘Baaghi 3‘ today and it was packed with never-before-seen action sequences, except for one. The trailer that saw Tiger turn into a one-man army, featured him lifting a car door to protect himself as bullets were fired at him. Interestingly, this scene was too similar to the epic fight scene in Gal Gadot’s ‘Wonder Woman‘.

Bhoot Part One: The Haunted Ship scene copied from Lights Out

The trailer of Vicky Kaushal’s ‘Bhoot Part One: The Haunted Ship‘ did enough to send shivers down the spine. However, many claimed that the film’s spooky scenes reminded them of scenes from some of the most popular Hollywood horror flicks. One social media user even pointed out that a scene from the film’s teaser trailer bore an eerie resemblance to the climax scene of the American film ‘Lights Out‘.

‘Saaho‘ may have had one of the biggest budgets in the Indian film industry, but even that wasn’t enough to get the team to be original. Apart from every other poster being trolled for its similarities to Hollywood films, popular television shows and even video games, reports claimed that the film not only had a similar plot to the French film ‘Largo Winch’ but also had too many similar scenes. Nonetheless, copied or not, the film went on to do very good business at the box office.

Although the ‘Baahubali‘ franchise remains to be one of India’s biggest films of all time, it cannot be denied that the makers may have sought inspiration from more than one Hollywood film. Among the many was this scene that saw villagers reaching out to touch Baahubali that seemed to be a rip off from the iconic scene in ‘Batman v Superman: Dawn of Justice‘ featuring Henry Cavill.

Ajay Devgn started off a hugely successful cop-franchise with his film ‘Singham‘. Packed with action, romance and comedy, the film had something for everyone. Interestingly, the epic scene where Ajay effortlessly steps out of a moving cop car appears to be copied from the Hollywood flick‘Red‘ starring Bruce Willis.

​Barfi scene copied from The Adventurer

There was much to love about the Ranbir Kapoor starrer ‘Barfi’, but the many scenes lifted from Hollywood films were not one of them. One of the film’s most talked-about copied scenes was one featuring Ranbir trying to dodge a police man using a sliding door. This one, in particular, was straight out of Charlie Chaplin’s 1917 short film, ‘The Adventurer’.

Did you know that the surprising ending scene of Vidya Balan’s ‘Kahaani‘ was actually a copy of Angelina Jolie’s ‘Taking Lives’? Although the movie had one of the best storylines and great plot twists, it cannot be denied that the ending of the movie was inspired by the 2004 American film.