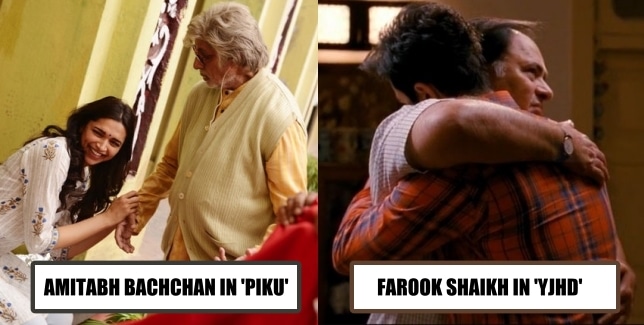 Parents have always been supportive to their kids , no matter how they behave . But they have to be strict at some point .. Now talking about some cool parents , which are seen in movies and I actually think , if this had a direct link with the real life ?

Today, we have brought to you some of the reel life parents who are too cool and a dream come true .

Jaane Tu Ya Jaane Na was released in the year 2008 where Genelia played the role of Aditi and her parents were pumpkin and Peachy .They were friends to Aditi and supported her to live life to the fullest .What else could cool parents do , they made her realised that she loves her best friend more than friends..

The role of Bunny’s dad was played by the late Farooq Sheikh. He was shown quite calm and understanding . The father who believed in putting his son’s ambitions above his fears. After her father died , Bunny reconciles with his stepmom as earlier he did not like to be with her.

Bhaskor , the character played by Amitabh Bachchan , who believed in the in gender equality was always with his daughter Piku . Although he was a stubborn character but he raised his daughter to be an independent woman who’s in charge of her personal and professional life.

Again one of the coolest parents was Shruti Kakkar’s who encouraged her a lot and never stopped her thinking out of the box .They help her achieve what she planned.

One of the best parents was of Rani who let her go on a solo honeymoon after her fiance calls off the wedding . While they are worried about her safety and emotional well-being, they understand that Rani needs a break to overcome the mental torture she had undergone. They supported her throughout her tough times.

One of the most hilarious yet cool mom, Manju . She knows where she has to be strict and when to be the friend of her daughter . Being that fun loving herself , she raised her daughter following her cool rules which actually should be applied to the real life too.

So guys !! I hope you liked the parents concept in the movies mentioned above ? Just add on to the list , if you know any…