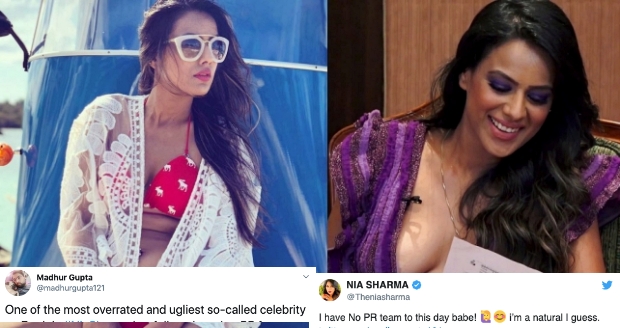 Celebrities are very active on social media so as to keep updated for their fans .On one hand there are die-hard fans but on the other side there are trollers who always cross their limits and troll the celebs without any reason.

Let’s see 5 TV celebs who were trolled and gave a befitted reply to the trollers:

The singing sensation Neha Kakkar , who is very popular for her rocking singing and she loves to click selfies and posting them on Instagram. However, she lashed out at the likes of Kiku Sharda and Gaurav Gera after the comedians made fun of her short height on their show and posted her response on Instagram as well.

Nia Sharma was given a tag by one of the twitterati as “ugliest celebrity in the world”who wrote, “One of the most overrated and ugliest so-called celebrity on Earth is #NiaSharma but full marks to her PR for making her so into news for no reason. In Mumbai Bhelpuri walas earns more than her.” Many users lashed back for the support of the actress.

The actress gave a befitted reply , she wrote “I have No PR team to this day babe! i’m a natural I guess.

A netizen trolled the actress a fat bull (moti saandh). She spoke to that person directly via Instagram and gave her a mouthful for her irrational behaviour on the social media platform also shared the screenshot of the conversation on the same platform.

Hina Khan does not need any introduction . Also being the contestant of Big Boss 11 contestant has been one of the most trolled actresses on the small screen. She has been trolled for her clothes . However, she had a reply ready for all her haters, which goes like this, ” Clothes don’t make a style statement ur personality does… otherwise, all designers wud b wearing and walking the ramp in their own designs.. bye the way she’s the designer herself it’s her piece designers WANT to source the clothes to only a few actors.”

The actress was body-shamed after she gained a significant amount of weight after giving birth to her baby girl. This caught Mahhi’s attention to the user. She asked the user that was his mother became thin after delivering him. She also asked the followers to think before representing a mother in an inappropriate way. Mahhi wrote, “Don’t ask me what kind of a mother I am. I wish I could ask your mother, what kind of a child you are.” Mahhi Vij and Jay Bhanushali became parents of a baby girl on August 21 of the previous year.