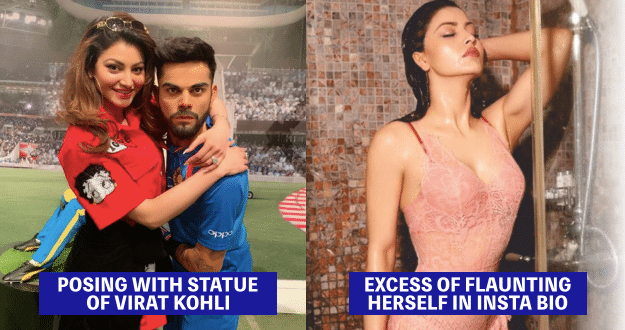 When it comes to glamour and beauty, the name Urvashi Rautela is inevitable. From Miss India to Bollywood, Urvashi has created a space in the industry and came a long way.  She rose to fame with Honey Singh’s music video titled Love Dose. Since then she has appeared in many music videos as well as movies.

But Urvashi Rautela always manages to get into controversy (and for no big reason). Let’s have a look at 5 such incidents when the actress was trolled.

Posting a picture with the statue of Virat Kohli

Urvashi Rautela, who was in London for the India vs Pakistan match played on June 16, had posted an image on her social media handle that shows her hugging the wax statue of the Indian cricket team captain Virat Kohli. But people got mixed reactions out of it. Some were amused whereas some angry and that sent a flurry of trolls in her way.

Veteran actress Shabana Azmi met with an accident on Jan 19, 2020. Several Bollywood celebs and politicians including PM Narendra Modi also tweeted for her speedy recovery. PM Modi tweeted, ”The news of @AzmiShabana Ji’s injury in an accident is distressing. I pray for her quick recovery.” And actress Urvashi Rautela copy-pasted the same tweet. As soon as she tweeted, netizens trolled her for copying PM’s tweet word to word.

Urvashi slammed a media report by writing a lengthy Instagram caption asking the media to stop posting negative things about her. Now, on the first read, it did sound like a powerful statement against the invasive and often harsh media. However, fans who read the caption realised that it was lifted, almost word-to-word from a comment that supermodel Gigi Hadid had posted on Instagram a while ago! Many social media users trolled Urvashi for copy-pasting Gigi’s statement and for passing it off as her own.

Urvashi Rautela may be a lesser known name in the world of Bollywood but that is most definitely not stopping the diva from keeping her self-confidence low. The actress faced the wrath of netizens after her Instagram bio became the target, showcasing her list of achievements.

“Youngest Most Beautiful Woman in the Universe,” starts her Instagram bio and goes on to boast: “Only Actor to win max no. of beauty titles in entire history ever.” “MissUniverseI|IITian|Theatre|Athlete|,” the bio added further. People asked her not to boast so much.