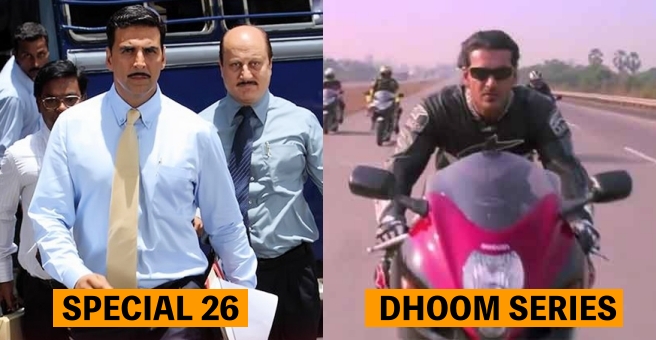 Movies take inspiration from life. Reel life portrays real life. But sometimes, it happens the other way around. People get inspired by movies. And not always in a good way. Films have been known to introduce newer perspectives to people but sometimes the newly received inspiration has proved fatal to the well being of some others. There have been people who drew inspiration for some serious crimes after watching a crime sequence in a Bolywood flick.

Here are 5 such Bollywood movies that inspired real crimes:

The Ajay Devgn starrer 2015 flick was an edge of the seat thriller but sadly one of its plot twists became an inspiration for a real life murder in Bhopal. A man called Indrapal Singh and his nephew took inspiration from Ajay’s character in the film on how to dispose a dead body and threw the victim’s body in the Hathikeda Dam in December 2015. The case came to notice only when the victim’s wife lodged a missing complaint about her husband.

Just like in the movie, where a plot of land was captured by a syndicate which then demanded money to let go of it, similar incidents happened in Delhi. Certain DDA employees would resell DDA plots by forging documents which lead to similar disputes between parties. Police said their modus operandi was inspired by the movie.

John Abraham and his troop’s cool criminal side may have impressed many, but some criminals took it way too seriously and got inspired to execute the plot of the movie in real life. On 30th December, 2007, the Chelembra Bank Robbery took place in Kerala. The robbers made a hole on the floor of the bank and got away with gold and money worth ₹ 8 crores. The leader of the group later confessed that they were inspired by the movie Dhoom, and used the same trick of making a hole on the ground floor of the bank during a New Year’s event. There have also been a lot of cases of petty roadside thefts where the cool Dhoom like bikes came in handy!

Eight people were arrested in Charkop, Mumbai when they planned a robbery that was inspired by the film Special 26. The team posed as Income Tax Officers with their fake IDs and search warrant and raided a businessman’s house. They left with cash and valuables worth more than ₹ 1.5 crores. The policemen who made the arrest were also made to see the movie to learn the way of the culprits. There are more than 15 cases of crimes inspired by this movie, which itself was based on a true story.

The film cracked us up and also taught some valuable life lessons to many, but some people found inspiration in the wrong parts and it led to a serious offence. A group of cheats took inspiration from this movie and sought to leak 10+2 examination papers. They would later use mobile phones to SMS the answers to those who had paid them the demanded amount. It also involved a sub inspector of the Delhi Police who would SMS the answers to the candidates. The syndicate had charged students in lakhs in an attempt to get rich overnight.