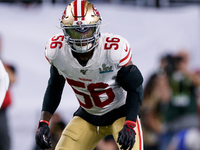 NFL Network Insider Ian Rapoport reported that Alexander was dealing with a biceps injury that is being surgically repaired Friday, per sources informed of the situation.

The biceps injury was in addition to the pectoral surgery Alexander underwent that forced him on IR. After missing the final eight regular-season games, the 25-year-old returned for the postseason march.

Alexander didn’t play particularly well after his return from the pec injury. News that he was also dealing with a biceps issue provides further context for those struggles.

The linebacker is expected to make a full recovery and be ready for the 2020 season. Rapoport added that Alexander’s 2020 salary goes from injury guaranteed to fully guaranteed on April 1, which is the reason he’s having the procedure now. The news confirms he’ll be back with the team in 2020, if there was any doubt whether they’d bring back the prized free agent for another run.