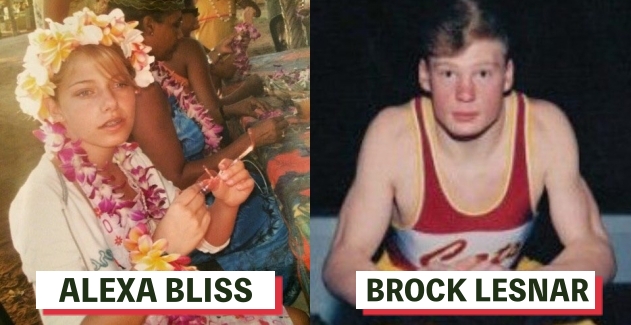 Few fans are more nostalgic than WWE’s. We love old stuff: old matches, old titles, old figurines, old shirts, old catchphrases, you get the point. That’s why the WWE Network was such a brilliant invention. It was made to exploit our infatuation with oldness.

Well, that’s to the internet, we get to go way back. We found an album’s worth of old photos of WWE Superstars. While some of these gems are from high school, a lot of them of your favorite WWE Superstars when they were just grade-school grapplers.

No the man in the navy sweatshirt is not Braun Strowman as a child—the youngling in the middle is the Pikachu version of the Monster Among Men. According to our sources, Braun is actually just three days old in this photo.

Even though Finn is 36 in 2018, his childhood photo looks like it could be from the first World War. Lucky for Finn, his smile and abs are both timeless.

Born with a silver spoon, Shane and Stephanie were no stranger to the wrestling world. As a youngster they would have the luxury of seeing legends like Hulk Hogan and Andre the Giant up close and personal.

A rare family photo of the two, along with their sister Mika. If you look at Mika today, you can see that she definitely grew up to be the looker in family.

Charlotte is not just a second generation wrestling legacy but also the current WWE female wrestling champion. Charlotte looks just as beautiful as a child as she does now. The rare photo gives a sense of realism to the star and that she too is a human with a real person’s past and childhood!

I don’t care if John Cena is fading away as a WWE Superstar. Of course, he’s holding a championship, too. From our vantage, Cena’s childhood toy is an exact replica of Pat Patterson’s original Intercontinental Championship.

The above photo is a rare one of Banks during her quest to become the Boss we have all come to known her as today.

This is what teenagers used to look like. Instead of having their faces buried in their phones, they would look out the window and emanate their adolescent angst. Thanks for the history lesson, Alexa!

Who knew that such an innocent looking boy would grow up to be one of the most physically destructive humans to ever walk the planet? We don’t have a date on this photo, but if we had to guess, this is Brock Lesnar in the first half of high school. Despite his ripe age, we’re not sure if Roman Reigns could beat this version of Brock Lesnar either…

The picture of Roman is sweet and adorable and a far cry from the type of publicity WWE is looking for! How can you possibly feel threatened by such a cute toddler and with that pout?

Their picture shows them as tight as ever and not even a WWE storyline that exploits their differences for the sake of entertainment can keep them apart. Divas since childhood!

This is a total gut call, but young Sheamus looks like he ate his boogers for at least a decade.

Past photos of The Undertaker are hard to find. Part of that is due to his childhood pre-dating social media by a few decades, and the other is the unspoken agreement to keep The Deadman’s humanizing photos under wraps. Well, this one got out, and we’re very happy it did.

Randy Orton has never once known what it was like to be ugly. Even at this young age, he still had his chiseled jawline.

In the photo above, Bayley strikes a similar pose during two vastly different periods of her life and although we are all familiar with the WWE Superstar, not many have seen her as a kid.

You can’t see it but both Young Matt and Young Jeff are each standing on 14-foot ladders in this photo. Shout out to Matt’s corner mustache.

If The Miz had been cast in The Sandlot there’s no doubt he’d be Hamilton Porter’s favorite punching bag. Thankfully for this vulnerable version of A-Lister, he didn’t have to go through that.

One of the hottest superstars in the current roster, Punk used to wrestle in a backyard wrestling federation with his friends and brother during his teenage.

The Cerebral Assasin must have been a late bloomer because in this picture, Triple H looks harmless. Take a good look WWE fans, this is the face, that will one day run WWE.

Well, this is adorable. Of course this handsome hunk of chubbiness would go on to start the Yes Movement!