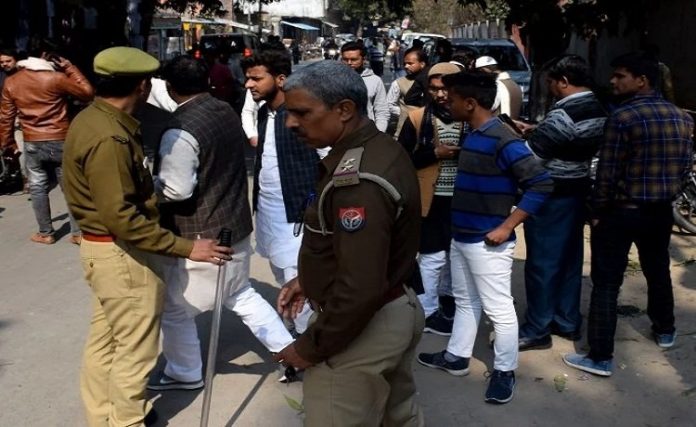 The Uttar Pradesh police on Wednesday arrested 19 persons on charges of sedition from Azamgarh for shouting secessionist slogans during an anti-CAA protest.

As per reports, a number of women had gathered in the Jauhar Ali Park of Bilariyaganj in Azamgarh from Tuesday afternoon to protest against the CAA. Like Delhi’s Shaheen Bagh, the local Muslim community had arranged for tea and snacks for the protesting women.

According to the reports, the police had named 35 protestors in the FIR, however, arrested 19 for carrying out violent protests against the citizenship law. One woman named Munni Bano was allowed to go by the police after she reportedly informed them that she is a heart patient.

The rioters had allegedly pelted stones at the police resulting in police using tear gas shells. The women were allegedly injured in the stone-pelting by the rioters, the police also said. The police asserted that there was no lathi-charge against protesters at Jauhar Ali Park in the Kasimganj area. The police have admitted that some tear gas shells were fired to disperse the agitated crowd.

It was further alleged that the protesters had gathered on Tuesday afternoon and surrounded the park from all sides. They even beat up people who were standing nearby.

Reportedly, the district police also said that the protestors had put up women and children at the front, who were holding stones and lathis.

“They were raising slogans against the government and the nation. They were saying they will snatch Azadi and will get Azadi anyhow. They were making hateful announcements against the Hindu religion. They were abusing Prime Minister Narendra Modi and also Chief Minister Yogi Adityanath,” the police said.

The protesters, on the other hand, alleged that the police had used communal slurs against the women. The police denied this allegation and said that at the protest venue, the people gathered had chanted anti-national slogans.

Read: Muslims in Bulandshahr pay over Rs 6 Lakh to the UP govt for damage caused to public property during anti-CAA riots

An FIR was lodged at Bilariyaganj police station under various IPC sections, including 124-A (sedition), 147 (rioting), 153-A (promoting enmity between different groups), 504 (insult with intent to provoke breach of the peace), 307 (attempt to murder), 120-B (criminal conspiracy) and under sections of the Prevention of Damage to Public Property Act and CLA Act.

Azamgarh police have also announced a reward of Rs 25,000 for information on three persons accused of rioting. They have confiscated four motorcycles claiming that they were used by the rioters. The police have stated that some policemen have sustained injuries and many police vehicles have been damaged in the stone-pelting by the mob.