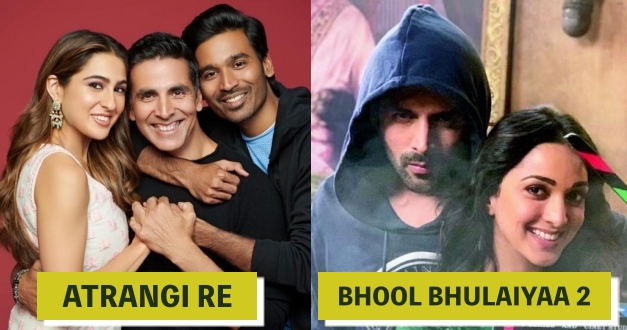 With the coming new year, here comes the new jodis of Bollywood , who will blow your mind by their talent and skills . Also their super chemistry will be worth watching .

The jodi of Sara Ali Khan , Akshay and Dhanush , will be seen in the movie .
titled Atrangi Re, the film is an AR Rahman musical that’ll be directed by Aanand L Rai and written by National Award-winning writer Himanshu Sharma. However, there’s still a whole year left for this film to hit the theatres. The makers have announced a 2021 release date. So before we cross over to the next year, take a look at these 18 fresh Bollywood pairings to in 2020 that actually deserve a shoutout.

While Ranveer Singh needs no introduction, Bollywood fanatics may not be familiar with Shalini Pandey. Pandey is a theatre artist from Jabalpur, who got her big break in Arjun Reddy alongside Vijay Deverakonda. She is gearing to make her Bollywood debut in YRF’s Jayeshbhai Jordaar as Singh’s co-star. The film will also feature Aparshakti Khurana and Boman Irani in pivotal roles.

Isabelle Kaif, Katrina Kaif’s younger sister, will make her long overdue debut on the silver screen with Kwatha this year opposite Salman Khan’s brother-in-law Aayush Sharma. The film is reportedly based on a real-life story.

Ayushmann Khurrana and Jitendra Kumar play boys next door in Aanand L Rai’s next film in the Shubh Mangal Saavdhan franchise—Shubh Mangal Zyada Saavdhan. The plot of this social comedy is set in a small town and revolves along the lines of how two conservative families come to terms with the fact that their sons love each other.

A lead pairing that we’re really looking forward to seeing this year is Amitabh Bachchan and Emraan Hashmi’s antagonist-protagonist duo in Chehre. Directed by Rumi Jaffery and produced by Anand Pandit, the film is a mystery-thriller and will also feature Krystle D’Souza, Rhea Chakraborty, Siddhanth Kapoor and Annu Kapoor in pivotal roles.

Ahan Shetty, Suniel Shetty’s son will mark his debut in Bollywood this year in Tadap—a Hindi remake of the 2018 Telugu film RX 100—alongside Tara Sutaria. The film is slated to be an action-packed romantic saga directed by Milan Luthria and produced by Sajid Nadiadwala.

Dostana 2—one of Bollywood’s most anticipated sequels is finally being made and released this year featuring Kartik Aaryan and Janhvi Kapoor alongside debutant Lakshya. The sequel is being directed by Collin D’Cunha. He’s previously worked as an assistant director in Bhaag Milkha Bhaag, Talaash and Sanju.

Talking about sequels, Bunty Aur Babli is also getting a part 2 this year with Siddhant Chaturvedi and Sharvari Wagh in the lead roles. This is Wagh’s first-ever film but according to the film’s director, Varun V. Sharma, she is a powerful performer. The film will also star Saif Ali Khan and Rani Mukerji in pivotal roles.

Former Miss World, Manushi Chhillar and Akshay Kumar have joined hands for an action-drama film titled Prithviraj. The film’s story is based on the real life of king Prithviraj Chauhan. It is slated to be released during Diwali.

After marking her OTT debut in The Family Man, National Award-winning South Indian actress, Priyamani Raj will star opposite Ajay Devgn in Maidaan—a biographical film based on the life of Syed Abdul Rahim. Rahim was an Indian football coach and manager of the Indian national team from 1950-1963 and also a former player. It is slated to be released in November.

Vicky Kaushal and Bhumi Pednekar in Bhoot – Part One: The Haunted Ship

While Vicky Kaushal and Bhumi Pednekar have multiple releases lined up for 2020, and one of these releases, Bhoot – Part One: The Haunted Ship, will bring the two together in the same frame. The film is directed by debutant director Bhanu Pratap Singh and jointly produced by Karan Johar, Hiroo Yash Johar, Apoorva Mehta and Shashank Khaitan. It also marks Johar’s first feature-length horror production.

One of Bollywood’s most talked-about couples, Ranbir Kapoor and Alia Bhatt, will star in their first-ever film together as protagonists in Brahmastra, which interestingly enough is a superhero film. The film is written and directed by Ayan Mukerji and produced by Karan Johar. It will also star Amitabh Bachchan, Mouni Roy and Akkineni Nagarjuna in pivotal roles.

Varun Dhawan and Sara Ali Khan in Coolie no. 1

After we see Sara Ali Khan on the big screen with Kartik Aaryan, this year, in Love Aaj Kal, we’ll also see her opposite Varun Dhawan in Coolie no. 1. The film is a remake of the 1995 film of the same name, starring Govinda and Karisma Kapoor. So here’s hoping they really deliver because both Govinda and Kapoor were ‘90s comedy icons.

One of the 10 exciting horror movies releasing in 2020, Roohi Afzana will bring together Rajkummar Rao and Janhvi Kapoor in lead roles. According to media reports, the film tells the story of a ghost who abducts brides on their honeymoon(s) (umm…okay then!) and will also feature a cameo by Shraddha Kapoor.

After sharing the screen together in Good Newwz, Akshay Kumar and Kiara Advani will be seen together as co-stars in Laxmmi Bomb—a remake of the Tamil film, Kanchana.

Kaali Peeli is the official remake of a 2018 Telugu film, titled, Taxiwala, that brings together newcomers Ananya Panday and Ishaan Khatter in lead roles. It is a mystery-thriller.

Replacing Akshay Kumar , in the horror comedy Kartik Aaryan and his pair Kiara Advani will come together in the sequel Bhool Bhulaiyaa 2. They will also be joined by Tabu in the lead role this July.

Actor Ranbir Kapoor and actress Vaani Kapoor is to be seen pairing in Yash Raj Film Shamshera . Sanjay Dutt will also be seen as the antagonist in the movie . It will be released on July 31.

Well!! this one is extra-ordinary as this time Ayushmann Khurrana and Jitendra Kumar play boys next door in Aanand L Rai’s next film in the Shubh Mangal Saavdhan franchise—Shubh Mangal Zyada Saavdhan. The plot of this social comedy is set in a small town and revolves along the lines of how two conservative families come to terms with the fact that their sons love each other.

Which jodi is your favorite ?