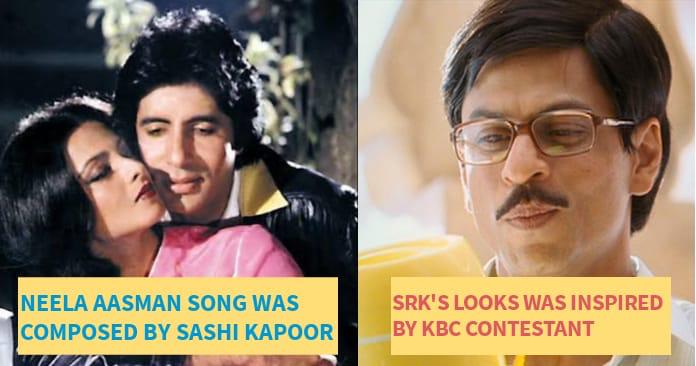 For instance, Darr was the love story from the perspective of a one-sided psychopath lover.

Dil To Pagal hai is traumatized love triangle, Veer Zaara is the foundation of international love stories and many more. Yash Raj Chopra is one of the biggest foundations who has shaped the Bollywood movies.

Check out these 18 interesting lesser-known facts about movies made under Yash Raj banner.

1. The love for Switzerland

Movies made under the Yash Raj Banner is famous for outdoor
location shoots. The dancing in the mountains of Switzerland is the signature
scene in Yash Raj romantic movies. However, it was first started with the movie
Faasle (1985).

2. A deep dive in Romance genre

Yash Chopra confessed that he was traveling in his car and
eyed on the film posters on the wall. He saw all the movies are action movies.
That was the time when he decided to work on a script for a romantic movie.
Guess he wanted to something different, and he made Sridevi starring Chandni.

Pamela Chopra was the singer and she only sang for Yash Raj Films.
She is the voice behind “Main Sasural Nahin Jaungi” in Chandni and
“Ghar Aaja Pardesi” from DDLJ.

There are many movies in which Shashi Kapoor played the
younger brother of Amitabh Bachchan. Silsila is the only movie where Shashi
Kapoor was the elder brother.

5. The song Neela Aasman was created by Shammi Kapoor

The tune for the song was created by Shammi Kapoor and
Amitabh Bachchan. This is the reason that Yash Raj took permission from Shammi
Kapoor to use the song.

DDLJ was the first film which includes credit rolling scene
at the last. It was the first time in Bollywood, and the title was suggested by
Kirron Kher.

7. Rab Ne Bana Di Jodi was written a long ago

Aaditya Chopra wanted to cast the Jodi of Shah Rukh Khan and
Manisha Koirala for the movie. Dil se featuring the Jodi tanked on Box office
and Aaditya Chopra dropped the idea.

8. Haule Haule is relaxing as per Shah Rukh Khan

In an interview, Shah Rukh said, ‘Haule Haule’ was the most
relaxing song he ever shot. He often makes such comments as he said ‘Kal Ho Na
Ho’ was his funeral song.

10. The one-take monologue in Veer Zaara

Shah Rukh Khan is a brilliant actor and he proved it by
making the monologue shot ‘Mai Qaidi Number 786’ in the Veer Zara in one single
shot. Another trivia is that there were no retakes in the shot as well.

All the prison scenes in Veer Zaara were shot in a single
day.

The couple met in the sets of Kabhie Kabhie. The new couple
got married in 1980 and they lived happily ever after.

During the recording sessions for Kabhie Kabhie, musicians
were on strike. Yash Chopra hired from the navy to complete the recordings of
his songs.

Sridevi rejected lots of Yash Raj movies. Yash Raj said that
Lamhe was his favorite movie in all his movies, and he was shocked when the audience
rejected the movie.

The story of Lamhe was heavily inspired by the book ‘Daddy
Long Legs’. It was suggested by Pamela Chopra.

During the shooting schedule of Dil To Pagal Hai, Akshay
Kumar argued with Yash Chopra for not getting paid the promised amount. The
fight continued for 11 long years.

17. DDLJ got the showreel for behind the scenes

DDLJ was the first film in Bollywood that got behind the
scenes 30-minute show broadcasted on Doordarshan.

18. Sooraj Barjatya is a big fan of DDLJ

According to sources, Sooraj Barjatya used to watch DDLJ
whenever he started writing a new film.