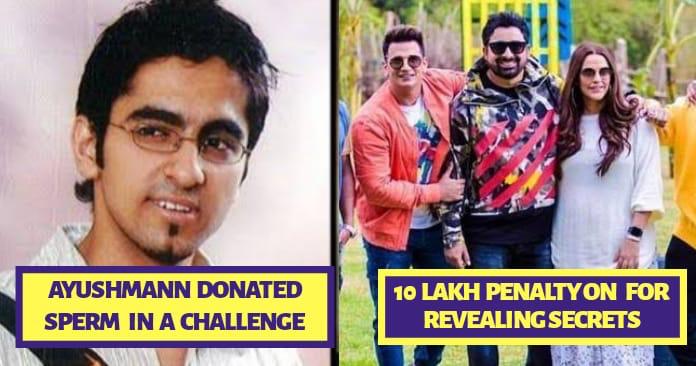 MTV Roadies is one of the most popular shows for youngsters.
The show needs no introduction as it has a huge fan following. Every year, all
the youngsters throughout the country give audition in Roadies and make
themselves popular through this platform.

The show is a perfect blend of fights, oozing glamor,
politics, daring stunts, and of course the much talked sensational judgments.
Recently the show was in news headlines because judge Neha Dhupia & Nikhil
Chinapa sparked the controversies by abusing a contestant.

Despite the backlashes and trolls, the judges of shows didn’t apologize for their harsh behavior. Well, this is not the only thing wrong with the show.

Here are 17 facts about the MTV Roadies that makes this show more appealing.

1. Inspired by US Based Reality TV Show

Roadies got a huge fan following among Indian youth. Little
you know that the show is not original and inspired by the US-based reality TV
show Road Rules that broadcasted in 1995.

Raghu auditioned for Indian Idol judges when he auditioned
for the first season of Indian Idol. He sang the song, “Aaj Jane Ki Zid Na
Karo.” He stretched before singing and screamed at judges.

3. Raghu got the nomination as the singer

Raghu sang the song ‘Manmaani’ a year after his rejection in
Indian Idol. The song was the title song of Roadies 9. He got nominations for
the song in the GIMA award 2012.

Ayushmann Khurana has donated sperm as a task in Roadies
season 2. Later, he was offered a movie Vicky Donor that was based on the
quirky topic of sperm donation.

5. Ranvijay participated in Roadies to win a bike

Little you know that Ranvijay participated in the show Roadies
just to win the bike. He said if he failed in the show then he would have
joined the army.

6. The penalty to not talk about the show

Contestant of the shows has to sign a contract, as per the
contract, they had to pay 10 lakh rupees as a penalty if contestant ever reveals
the backstage process and secrets about the show.

7. Ragu was married to Sugandha Garg

Little you know the fact that Raghu was married to Sughndha
Garg who played Sahleen in the movie Jaane Tu Ya Jaane Na. The couple separated
in 2018 after the 12 years of marriage.

It is the very astonishing fact that two winners from Roadies also won the hit reality show Bigg Boss.

9. There’s a protest against Raghu, Rannvijay, and Rajiv

Back in 2011, during the promotional event of Roadies in
Pune, some ABVP activists blackened the faces of Roadies judges. They are
protesting the use of offensive words by judges in the show.

11. Sahil Anand was the contestant on Roadies 4

Sahil Anand, the contestant of Roadies 4 also participated
in Bigg Boss 10. He also featured in the role of Jeet Khurana in Karan Johar’s
Student of the year.

The Bolly Chopra who appeared in season 6 of the Roadies now
owns a successful makeup agency. The agency’s name is Bob Chop Makeovers.

Shaleen Malhotra is one of the few Roadies who has a successful
career after Roadies. He featured in many TV shows like Arjun, Pyaar Tune Kya
Kiya, and many more.

14. Raghu and Rajiv left the show

Raghu and Rajiv left the show Roadies after its 11th
season. They are focusing on their production company, Monozygotic.

Roadies 6 winner Nauman Sait became the face of local
cricket camp in Bengaluru. His reputation faded when her MMS with another
Roadies contestant leaked online.

Palak Johal won the season 10 of Roadies. Later she appeared
in some music videos. She revealed that the entire show of Roadies is scripted.

During the general elections of 2014, Raghu Ram actively
campaigned for Aam Aadmi Party.