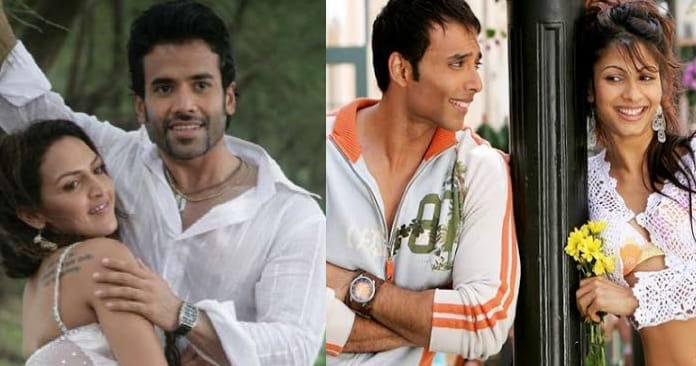 Bollywood often tries to bring fresh pairs and most of the time
people love it. For instance, Shahid Kapoor and Sonakshi Sinha made a great
pair when they featured in the Movie R… Rajkumar.

However, we are not talking about the successful pairs, we
are talking about celebrity pairs that failed to make any mark on the silver
screen.

Remember the movie Kismat Konnection that failed to make any
connection with the audience. In every scene, Shahid and Vidya looked awkward,
they lack the necessary chemistry.

A very forgettable film Aaryan brought a fresh pair of
Sohail Khan and Sneha Ullal. The movie tanked on the box office because of the average
acting for star actors.

Sajid Khan’s most ambitious project Himmatwala got lots of
negative reviews from fans and critics as well. What people don’t like is the
celebrity couple pairing of Ajay Devgn with Tammana Bhatia.

Tusshar and Isha made a fresh pair for a romantic comedy
‘Kyaa Dil Ne Kahaa’. The movie was a complete disaster with an IMDB rating of
2.9.

Another pairing of Tusshar Kapoor with Kareena Kapoor was
not accepted by the Indian audience. They featured in two Bollywood movies as a
romantic pair, ‘Mujhe Kuch Kehna Hai’ and ‘Jeena Sirf Mere Liye’. Both the
movie was a flop.

Rani Mukerji did a movie opposite Shahid Kapoor named Dil
Bole Haddipaa! The movie did average, but the paring for the movie looked very
awful. Fans didn’t like the pairing of Shahid with Rani Mukerji.

The much-talked star kid started their career with the same
movie. Abhishek Bachchan and Kareena Kapoor’s first movie was Refugee that was
a big flop.

Uday Chopra and Tanishaa Mukerji were cast for the movie Neel n Nikki. The movie was a big disaster because of unrelatable story.

This was the first and last film of Uday and Tanishaa as lead pair.

Bipasha Basu and Karan Singh Grover were dating during the shooting schedule of Alone. The couple got married after that.

However, fans didn’t appreciate the chemistry between the real-life couple on screen, and Alone was the big flop of the year.

Harman Baweja and Priyanka Chopra featured in two movies as
lead pairs. ‘Love story 2050’ and ‘What’s Your Rashee?’ Both movies failed to
impress the audience.

There were huge expectations from Kartik and Sara starrer
Love Aaj Kal. Well, the much talked fresh pairing was not appreciated by fans
in theatres.

Athiya Shetty and Sooraj Pancholi made their Bollywood debut as a lead pair in Hero. The movie tanked on the Box office.

The average acting, and poor script, and lack of chemistry between actors are the main reason movies missed the success mark.

Deepika Padukone was cast opposite Abhishek Bachchan in
Ashutosh Gowariker’s “Khele Hum Jee Jaan Se’. The movie was not impressive at
all with boring screenplays and slow acting.

Ayushmann Khurrana and Sonam Kapoor were signed as a fresh
pair for the movie Bewkoofiyaan. The movie hasn’t any likable elements that we
expect from Ayushmann’s films. Plus, Sonam and Ayushmann made an off pair.

Another big debut movie of the star kid that flopped badly. Ranbir Kapoor and Sonam Kapoor were featured in Saawariya. The movie was a big flop despite having talented actors.

It was rumored that Sonam and Ranbir are dating during the shooting schedules of Saawariya.

One of the disastrous on-screen pairings was Aamir Khan with
Twinkle Khanna in Mela. The actors hadn’t any chemistry, and the movie was
overshadowed with other elements than the love story of its main characters.

Well, in some way movies achieved what they wanted. They
want to show an awful pairing that can match the title ‘Pyaar Impossible’ and
the pairing of Uday Chopra with Priyanka Chopra is something awful and related
to the movie title.