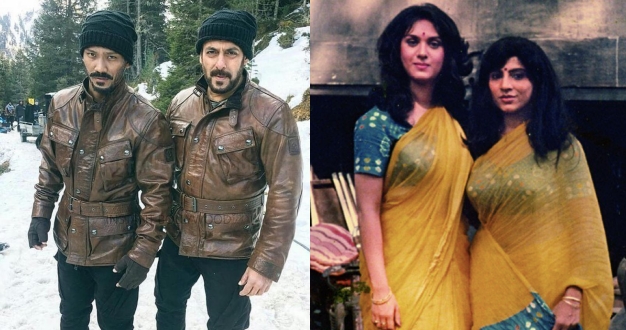 When you people see any ultimate stunt in the film , do you ever realize that the faces behind our super stars are performing those scary and worth watching stunts ?

The faces behind the real actors should get much more admiration as our favorite stars get.

Today, let’s see those faces which are playing body-doubles for the celebs :

This wonderful man is El Berni who played the body-double for Salman in the movie. Well, in case you are wondering who that is, you need to go back and check out the action sequences in the film.

Seems like the nimble-footed Kamli developed cold feet when it came to doing the action scenes.

Ashutosh Gowariker’s period drama will see Hrithik Roshan take on the baddies of Mohenjo Daro… Well, not exactly him, but these two men swimming with him.

The man is M. S. Balram and has uncanny resemblance to Abhishek Bachchan . he plunged into the river from the top of a mountain in the direction of Mani Ratnam.

I’m sure even if the stunts were 100% safe to perform, this time Aamir decided to put the ball in the stuntman’s court .

As far as the scene of stunt goes  Khiladi Kumar  loves to do it himself but in the film “Chandni Chowk To China ” he had a body double who performed for him.

They hired a boxer so that Priyanka’s blows looked as similar as possible to that of the real Mary Kom.

Hrithik did most of the stunts by himself for the film ‘Bang Bang’ but after injuring himself while filming ,he needed someone to perform for him.

SRK plays his own fan in this movie. With Fan , director Maneesh Sharma has tried to capture the beauty of Croatia, a place that has never been filmed earlier in Bollywood. Shah Rukh has a double role in the film and also a body double.

Reshma, Bollywood’s favourite yesteryear female stunt double, has been putting her life on the line for three decades, pulling off dangerous stunts for quite a few leading ladies of Bollywood.

Among the many films where Reshma has played a body double, the most iconic has been Sholay.

Rani chased down a gangster on a bike and beat the shit out of him. Good job, stunt double.

Just before SRK’s double takes down Boman Irani in the final scene of Don, he decides to share a smoke with King Khan.

In the film , this guy made the efforts to beat gets beaten up by the South Indian goons.

It’s Reshma again. She was paid double the money as a stuntwoman as opposed to playing a junior artist.

Ranveer Singh’s body-double in the film was this guy . He did a superb job indeed.

We all should have a soft corner for all these men and women , who just play the body double without any identity .