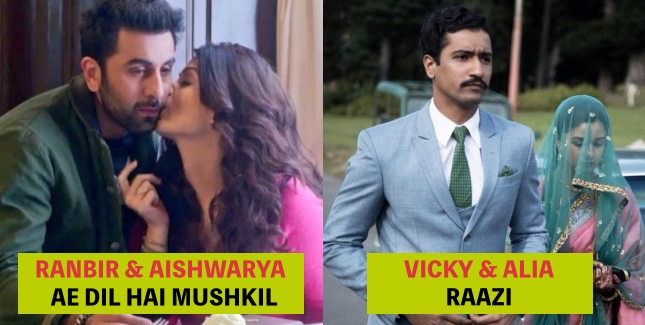 In the present scenario , there are so many talented actors in the film industry that we cannot count them just like that . They are doing good in their career and proving their worth .

Seeing this, even directors would have thought that the pair of the skilled and popular actors can match up with the young and talented ones .

Our today’s story is all based on the same . We have brought to you some of the on screen jodis that gave a really pleasant surprise to the audience .

Considering the story revolved around Kareena, and the movie relied on glam characters and equally glam setting, Sumeet Vyas was an unexpected actor to cast. And yet he seemed the perfect choice to play Kareena’s fiancé.

Even though the two were the perfect match in terms of acting potential, no one would have thought of casting an independent, emerging actor like Vicky Kaushal with a mainstream star like Alia Bhatt – and yet their subtle chemistry was absolute perfection!

This was as unconventional a pairing as there can be, and yet it would not be a stretch to say the two literally sizzled on screen and looked completely comfortable with each other.

Karishma Kapoor was known for typical Bollywood entertainment movies, while Bajpayee was the quintessential method actor. But this movie proved it, that all an unconventional pairing needs is a good story.

Even though Diljit Dosanjh is a well-known face in the world of Punjabi cinema, even he could not believe that he was paired alongside Kareena in the movie. And yet, the two lent an authenticity to their roles.

Not only opposites in terms of their movie choices, as characters too, Konkana and Ranbir comfortably convinced us that opposites do attract. This intelligent casting made their pair far more realistic than many other Bollywood pairs we’ve seen.

It wasn’t just their characters that looked completely opposite each other – even the actors have had a very varied filmography. And yet, the two fit together in the movie like pieces of a puzzle.

Parvathi had us convinced about the struggles of a middle-aged single woman, and Irrfan worked his comic timing with an unexpected ease, but it was their subtle chemistry that became the highlight of the movie. Unexpected it might have been, but if there was an award for perfect casting, it would go to this movie.

It is only when you see the movie that you realize that Anushka and Parambrata look effortlessly good together, and are the main reason you believe the love story between an unusual pair: a simple man and a demonic girl.

An old romantic falling in love with a widowed begum may feel like a chaste affair, but the unusual pairing of Naseeruddin Shah and Madhuri Dixit made sure it was anything but that! Backed with an unusual but interesting story, this was one couple that is hard to forget.

As a producer, Anushka Sharma has broken the mould not just with her movie choices, but also with the casting in said movies, and she proved it right from her first movie, where she was cast along with Neil Bhoopalam. And they looked absolutely perfect together.

In Phillauri, Anushka and Diljit managed to bring alive the innocence of the time in which their romance was set. And while individually they were brilliant in their performance, together, they made for an even more adorable pair.

Manav Kaul and Vidya Balan’s pairing turned out to be an unexpected gem in this movie. Their chemistry was relatable, their interactions felt honest and the two stars, despite never having shared the screen before, made their characters come alive in a way it is hard to imagine other stars doing.

Their movie choices are as different as their acting styles. And yet, Rahul and Malaika made the perfect couple in this quirky movie.

For her debut film, Farah managed to wow the audience, and her incredibly talented co-actor, Boman Irani obviously played a big role in that.

So which jodi is your favorite one ? Do let us know in the comment section below.