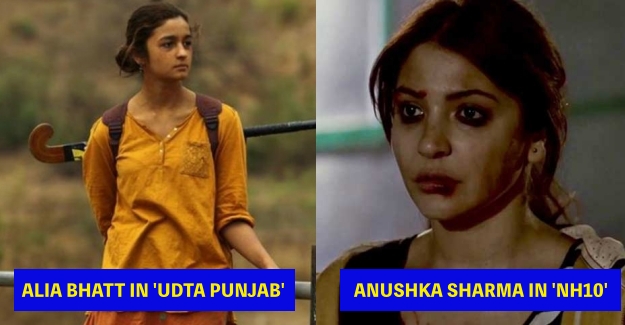 The past decade has been a transformative one for the Bollywood industry especially when it comes to female representation. In a largely male-dominated, patriarchal society, rarely do strong women-centric roles get written in Indian cinema. But every now and then, our actresses portray such fierce roles that it makes us sit up and take notice. It gives us a much needed push to be free, independent, liberated and not take things lying down.

Bollywood has also given us some badass women who delivered some powerful roles. Here are 15 strong women characters in Bollywood.

For anyone who thinks women should be demure and coy, meet Shivani Shivaji Roy. Rani Mukerji as the top cop shows both physical and mental strength of a woman in Mardaani. She not only single-handedly beat up some nasty goons but also solved a high profile child trafficking case. Respect, respect and some more respect!

Kareena Kapoor completely transforms herself into a street-side prostitute, who is full of snappy one-liners, charm and wit. Chameli shows an honest view of life as a sex-worker. She completely redefines the image she had been associated with, and sinks into character infusing it with a gritty vulnerability that makes it unforgettable.

A gritty and gruesome tale of rape, murder, and misogyny, NH10 looks into the dark horrors that Meera experiences. Anushka Sharma plays the role of a woman who fights for justice and defends herself in the most trying circumstances, not once backing down because she is a woman.

She’s Mary Kom you guys! Do I have to give a reason for her inclusion in this list?

Fighting against almost insurmountable odds, Mary Kom shows us how dedication, sacrifice, and hard work is the only way to earn respect. Her life offers us a look into the life of a woman who will compromise neither on her personal nor her professional life, and that the only way to achieve your goals is to stay true to your beliefs.

The bai with limited means going back to school, not just to push her daughter to take her education more seriously, but also to find her own passion for it.
Just because she is a mother, does not mean she does not have insecurities or failures. And yet, she faces them all, just to help her daughter. Not all on-screen moms cry in vain – some take matters into their own hands, literally and creatively, as Chanda did.

Alia Bhatt as a nameless, impoverished young migrant from Bihar, who turns into a drug addicted sex slave, gave one of the best performances of her career in Udta Punjab. Even after being abused on a daily basis, she doesn’t give up, as she stares out of her small window every day and yearns to be free and happy one day. It was a true survivor’s tale.

A pregnant woman in search of her husband fighting against all odds… that too with a serial killer on the loose, swept the audiences off their feet. Taking on figures of authority when a woman is supposedly at her weakest, Vidya shattered loads of stereotypes while going up against naysayers.

The assertive Zeenat is a force to reckon with. Dor proved that Bollywood had grown enough to be able to portray friendship between women, as well as it does between men. Her maturity and sheer determination definitely made her a woman of substance.

Different from most female characters in Bollywood, Shabana is a spy who is fearless and can give anyone a tough fight on the field. Kudos to Taapsee for giving people a badass character to look up to.

A victim of circumstances, Mumtaz’s journey begins as the epitome of Bollywood’s portrayal of a damsel in distress. But her strength was her ability to get up andshake it all off, and get right on track. A must watch for all Bollywood buffs!

Rani, a woman with scant English-speaking skills, goes off to Europe on her honeymoon alone and takes control of her own life, after being left at the altar. After some self-realisation, she proceeds to dump her no-good fiancé. Does anyone need further proof that marriage is not the be-all and end-all for women? It encouraged and inspired women to come out of their shells and follow their dreams.

Radhika’s character, Lajjo who is a rajasthani woman stands up to her abusive husband and tries to change the customs of a patriarchal society.

13- Richa Chadha in Gangs of Wasseypur

There aren’t many mothers in Indian cinema that would plot an elaborate revenge for having been abandonded by her husband. Manipulative, and cunning all the way, Nagma Khatoon is up there with the mums we underestimated grossly!
What’s more, she used her sons as key elements in her badla .

Leni is no distressed female who goes into prostitution because she cannot face the world after an MMS scandal. When she receives no support from her father, she stops looking for support from any male in her life. She lives her life on her own standards, and chooses to become the multi-lingual Chanda, a self-professed prostitute, who wears that tag on her sleeve.

We see role models everywhere, but never in the homemakers and mothers around us. She perfectly represented Indian housewives – the section of society we tend to ignore, not realising how important their role is in our lives. And though she is the who learns a new skill, yet she successfully schools her family on howevery member deserves equal love and respect.

These were characters who made us believe that our desires, ambitions, mistakes, and experiences were not only natural but also acceptable. Know of any other female characters that spoke to you?