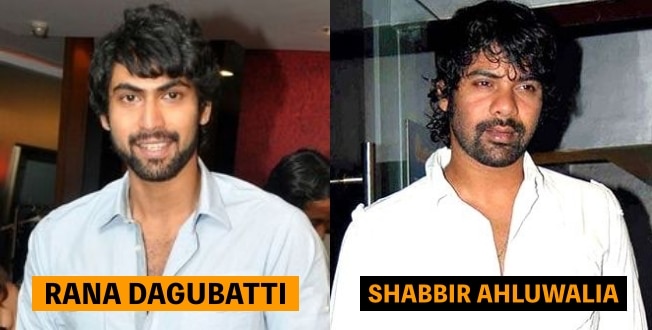 It’s been a relish seeing the celebs look alike and the expressions they have when people call them the doppelganger of the celebs .

Many Indian television stars style themselves look similar to their Bollywood counterparts. Few you might know but we assure you missed out many. Check out the ten Television stars that are exactly doppelganger of these Bollywood celebrities.

Dimpy Ganguly and Sharmila Tagore: What say about this one ? just epic The moment Dimpy made an entrance in the show Swayamvar Season 2, she was seen as a young Sharmila Tagore. The dimpled smiles of both actresses just makes them look like twins.

Karishma Tanna and Deepika Padukone: The Bigg Boss 8 runner-up is very much a look-alike of Bollywood star, Deepika Padukone. From their height to dimpled smile, we find it hard to tell them apart at one glance atleast.

Sara Khan and Riya Sen: The looks of both the actresses look somewhat same . They even did not achieve a healthy career if compared .

Gautam Gulati and Varun Dhawan: The Bigg Boss 8 winner may idolize actor Salman Khan and wish to look like him. However, there can be no denial that he is practically a twin to newbie actor, Varun Dhawan.

Sana Baloch and Niharika Singh: The Pakistani television actress who is currently seen in the series Mausam on Zindagi channel, clearly reminds us of Niharika Singh. Niharika played the lead role in the movie Miss Lovely. Similar enough, right?

Karishma Kotak and Nargis Fakri: Karishma Kotak who became a popular face after her participating in Bigg Boss 6 clearly resembles actress Nargis Fakhri. They look much more similar when it comes to the lips ..

The look alike of Nana Patekar has been recognized with netizens and we can actually see that they have similar looks.

This is the most popular one and many memes were made in the context to this picture of the doppelganger of Saif . As it is seen that the picture is of a petrol pump employee.

Paraag Chaddha and Zayed Khan – Parag Chaddha is the popular Indian Model and TV actor who has been the part of hit TV serial Jamai Raja. He has also gain youth fan following by appearing in the season 3 of MTV splitsvilla. His face is very similar to the actor Zayed Khan.

Viruskha Mehta and Tammanna Bhatia :- Virushka had gained a fair share of popularity from the TV serial Dil Dosti Dance, and she is also a professional dancer. She has played the impactful character of Shairan Rai Prakash in this TV serial, and gain a huge fan following. However, her face is very familiar to the industry as she resembles the looks of Tamanna Bhatiya who is a very popular actress of Bollywood and Tollywood.

Jaskaran Singh Gandhi and Uday Chopra : – Jaskaran is a popular face of the TV industry as he appears in many TV serials along with the hit TV serial Mile Jab Hum Tum. He has been a part of various celeb reality shows throughout the time. However, he resembles the looks of Bollywood actor and producer Uday Chopra.

Gautam Rode and Fawad Khan :-The good looking Gautam Rode has gained a huge fan following among female fans and got from TV industry to Bollywood. He was seen in the film Aksar 2 opposite Zarine Khan and before that he was an active part of the music videos . He looks like the Pakistani actor Fawad Khan who gained popularity from the film Khoobsoorat , where he acted as the Rajput Royal King and the film Kapoor ans Sons.

Some random look alike and SRK:- This picture is some random one and the person in the picture just looks a lower version of SRK .

Some candid picture and Veerender Sehwag : The picture too got viral when the doppelganger of Veeru was seen .

Which one you would have seen earlier and compared to? Just add on to the list ,if you know any..