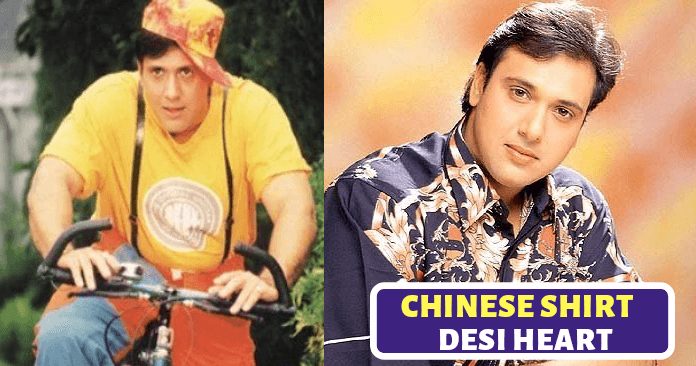 Govinda is a very famous actor and best known for his comedy
movies, impeccable timing, and groovy dance moves. But there’s one more thing
about the actor that is talk of the town. The bizarre fashion sense introduced
by a stylist in the name of funky is used by Govinda for a couple of decades.

Everybody is amazed by the fact that how Govinda can pull off
those weird dresses and colorful fancy fashion and look cool. Hats off to the
confidence level of Govinda. However, we created this post to celebrate some
amazing look of Govinda in those weird costumes he used to have for movies as
well as his social appearances.

Check out the list of 14 funky dressing styles adorned by
Bollywood actor Govinda which can be called funky.

1. The yellow t-shirt with red and blue shorts

You must have found that yellow t-shirt with red and blue shorts an awkward combination but Govinda looked very cute and bold by wearing such a fashion.

Furthermore, he took a hat as well to complete the look. You can always question Govinda’s fashion and the answer will always be this cute.

I’m damn sure if you wear such a look for your party or
events you will look out of the place. However, Govinda looked smart and
handsome by wearing such a fashion.

3. The colorful gift wraps as the dress

For the cover issue of a leading magazine, Govinda comes up
with an awkward dress. Well, Juhi Chawla also joined him and they both appeared
wearing gift wraps around them making poses.

For a scene in the movie, Govinda appeared in a bizarre
print design t-shirt. The dress selection of Govinda always amazed fans and
media every time he showed up on the camera.

For a photoshoot, he chose to face the camera with an
awkward combination. He decided to wear a long shiny blue overcoat that has a round
pattern all over, and a red shirt underneath.

6. The funky look with a cool jacket

Govinda has once seen in a funky look wearing the jacket and
lots of lockets. The jacket looked like a great use of old curtains that has
spiral designs.

7. The rich look of Govinda from movies

In a scene where he supposed to seem rich. He chose to come
up with a mustard color full sleeves shirt that has printed patterns in black
and red.

8. The funky look with cartoon tee and white jacket

Govinda always surprised us with his dressing and fashion
sense. At once, he wore a funky cartoon tee with a big heart printed on. And
complete this dress with a white jacket and hat.

9. The gentleman in half sleeve blue shirt

Ina photoshoot of Govinda, he wore a half shirt that has
Chinese prints on it. The blue shirt with an awkward Chinese pattern can only
be in the wardrobe of Govinda. Or maybe Ranveer Singh’s wardrobe.

10. Identify Govinda and his fashion in White and blue party wear

Govinda had been seen in an event with this look where he
wore a blue suit and matched it with a pair of white pants. The dress looked
out of place but it didn’t affect Govinda’s confidence even a little bit.

11. The rock star look of Govinda

In a photoshoot, Govinda has been seen wearing goggles and
inner while handling guitar and helmet in both of his hands. He completed his
rock star look with a pink scarf wrapped around his neck.

12. The Zebra Print shirt is never out of fashion for Govinda

In one of his movies, he wore the zebra print shirt with the
same confidence as he came up wearing any other outfit. He completed the look
with wearing a cap and shades.

13. The Denim look of Govinda

Little you know that the great artist of the 90s has also
dressed in Denim jacket. He completed this cool denim look with goggles and
matching pair of jeans. It just to accept the fact that Govinda looks amazing
in whatever he wears.

14. The style statement in purple pants

You have had some guts to get out of your room wearing
purple pants. If not, you can’t be Govinda. Check out this look of Govinda
where he wore purple pants and matched it awkwardly with the red and blue print
t-shirt.

Do comment down which one is your favorite and which can you
wear for a day as a dare.