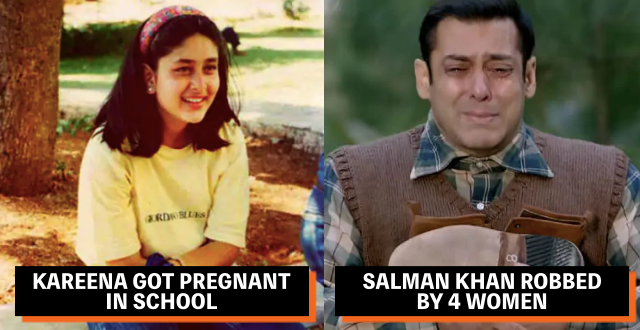 Bollywood and its filmi duniya are not as perfect as they look from the outside. In this industry of glitz and glamour, there are a plethora of hidden Bollywood secrets and scandals.

Bollywood is an industry where secrets, be it funny or dirty are not only hard but impossible to keep. In a country where both craze and crave for Bollywood often reaches insane limits, even the paparazzi leaves the stars with very little privacy.

Although the paparazzi are always on their toes to give us all the updates and whereabouts of our favourite stars, there remain a few mysteries of the fraternity that are unsolved till date.

Now, let us give you a glimpse into all such unsolved mysteries of Bollywood till date.

SRK and Gauri are often hailed as the perfect celebrity couple but not many are aware that there has been a rift in this relationship too.

Tongues have been wagging for a while now. Priyanka openly blushed on Koffee With Karan whenever Shah Rukh‘s name was mentioned. Then, there was news of the two spending more and more time together, which caused a lot of raised eyebrows. There were 3am office meetings, chemistry during award ceremonies and alleged bonding during parties – all of which kept the rumor mills churning.

Apparently, there was news of the two getting married in a secret ceremony in Toronto, Canada. Furthermore, news about Gauri Khan keeping PC off the party guest lists added fuel to the fire.

So what really happened here – was there an affair, or was it simply friendship (and SRK’s naturally affectionate nature) that was misunderstood by the media?

2- Kareena Kapoor Got Pregnant In School

No one knows who started this rumour of Bebo getting knocked-up in ninth grade. Being a star kid Kareena has always been popular even before her Bollywood debut. So, it’s no surprise she was targetted by gossipmongers. The actress attended Jamnabai Narsee School in Mumbai followed by Welham Girls’ School in Dehradun. She attended the latter primarily to satisfy her mother, though later admitted to liking the experience.

Rumours of Arjun and Sussanne’s alleged association started to swirl in 2014 after the latter decided to end her marriage with actor Hrithik Roshan.  Seeing their closeness there were rumours of them getting married. Gossip mills insist that Arjun and Mehr’s differences arose from his alleged involvement with Sussanne Khan. Arjun is now in a relationship with Gabriella Demetriades.

The golden couple of Bollywood were together for 17 years, including 4 years of courtship, and were often regarded as the ideal couple from the industry. However, following some untold reasons, the couple headed for a divorce and was granted the same on November 1, 2014. Although, there are various stories that brewed as the reason behind the separation, the beans of truth are yet to be spilled.

The rumours of Kangana and Hrithik alleged relationship were doing rounds in 2016. And with it came running her past of her relationship with Adhyayan Suman who was her co-star in Raaz: The Mystery Continues. Reports suggested that Kangana used black magic to make sure Adhyayan remains loyal to her. It was also said that Kangana used her menstrual blood in his food as a part of her practices.

6- Salman Khan Got Robbed By 4 Women

If reports are to be believed, it is said that a group of four girls approached Salman claiming to be his biggest fans, and the warm hearted Khan was kind enough to have a chat with them. But a while after the fans left, Sallu bhai realised that his wallet, sunglasses and the famous Bajrangi Bhaijaan pendant were missing.

Legend has it that Mithun Chakraborty and Sridevi had a love affair in the 1980s and wound up secretly tying the knot. This marriage rumour is unfounded, with Sridevi having previously denied they ever married or had a relationship, it is widely reported that they did secretly date for a number of years.

Mithun and Sridevi’s relationship ended in 1988 when Mithun allegedly refused to leave his wife for the actress. This paved the way for Sridevi and Boney to marry. They tied the knot in 1996. Sridevi died on 24 February 2018 after suffering a heart attack.

Bollywood was in a celebratory mood when the news of engagement of Abhishek Bachchan and Karisma Kapoor was officially announced by the respective families. However, soon another news surfaced that the engagement has been called off for the reasons best known to the families only.
While many assumptions about a tiff between the two families, or Abhishek’s uncertain career were made, none of the clans had given any official statement behind the break-up. Thus, leaving it to become one of Bollywood’s most discussed mysteries.

The striking resemblance of Sonakshi’s face with Reena Roy gave rise to the rumour that made many people believe that Sonakshi Sinha is in fact Reena Roy’s daughter and not Poonam Sinha’s. Another rumour about Alia Bhatt being step-sister Pooja Bhatt’s daughter have been around for a while now.
Similar rumours about Aaradhya and grandpa Amitabh Bachchan remain unsettled. According to the rumour Aaradhya is actually Amitabh’s daughter instead of Abhishek’s.

Did you know Aishwarya Rai Bachchan was the first choice for Chalte Chalte instead of Rani? But SRK threw her out of the movie because of Salman Khan. Yes. Salman Khan would drive down to the film set everyday and would create a havoc. SRK grew intolerant with this unprofessionalism and also ran into a tiff with Salman that lasted for years. This resulted in Aishwarya getting replaced by Rani Mukerji in the film.

11- Karan Johar & Sidharth Malhotra Were In A Relationship

With the release of Student Of The Year, there were rumours of KJo dating Sidharth. Though Karan is quite vocal about LGBTQ issues, he never commented on this piece of rumour. So their relationship truth is unknown. Currently, Karan is rumoured to be dating fashion designer Manish Malhotra.

12- Aamir Khan Has A Love Child With Jessica Hynes

Did you know Aamir Khan allegedly has a love child with Bollywood writer Jessica Hines who he had met during the shoot of Vikram Bhatt’s Ghulam. While Aamir has denied any possibility of a love child, Hines has been pretty vocal about it. She once said in an interview that when their son grows up, she would tell him that his father didn’t like them! Though it makes us wonder if anyone can make such tall claims without an ounce of truth in it!

Sushmita Sen has two adopted daughters-Renee and Alisah. In an interview with Bollywood critic Rajeev Masand, she had said: “I may not have given birth but I am a mother.” So it is believed that Renee and Alisah are her biological children.