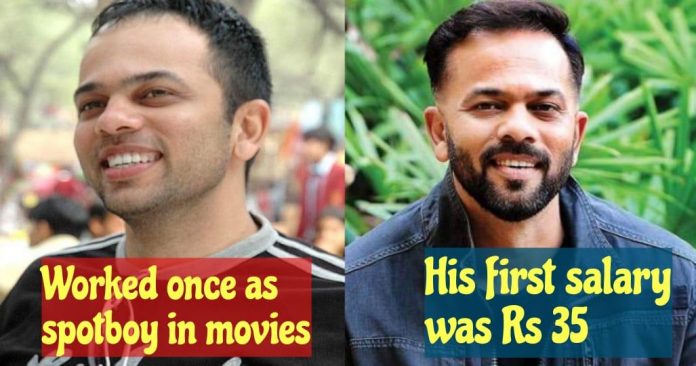 Rohit Shetty is one of the most bankable directors in Bollywood. Most of his films are in 100 crore clubs and fans are now waiting for the release of his movies.

He started the trends of flying cars in Bollywood movies. For instance, fans are talking that only he can make a fast and furious remake in Bollywood.

But there is a big story of struggle and passion behind the glamorous life of this director. He is now hosting one of India’s biggest celebrity reality show “Khatron ke Khiladi”.

He is working with A-list Bollywood actors in movies. However, this article focuses on the lesser-known facts about this Hot-headed director named Rohit Shetty.

1. His dad passed away when he was only 6 years old.

A life-shattering demise of fighter Shetty forced Rohit’s mother to work as a junior artist in Bollywood.

In an interview, Rohit said, “I think everybody has their
story. I was in third or fourth when my mom had to start working because… (his
father passed away.) Today, we are quite smart, we do our investments. Earlier,
it was not like that.”

2. He traveled a long distance to attend his school.

You have heard how famous people struggle to get their education completed by covering miles for schooling. Well, Rohit Shetty’s life is no exception, as he used to take Virar local train every morning at 5:49 AM.

This way he completed his schooling and that is the morning rituals for Rohit Shetty until he turned 15.

He didn’t continue his studies and started working as AD in Bollywood movies. He met a film director and almost begged him for work. He worked for rupees 35 as an assistant director in the movie Phool aur Kaante.

In addition to this, he became friends with Ajay Devgn
during the shoots of Phool Aur Kaante. He got the action guidance from Ajay
Devgn’s father Veeru Devgan.

4. No one wanted to do a movie with him after ‘Zameen’ bombed.

Rohit Shetty made his directorial debut with Zameen starring
Ajay Devgn. The movie was a box-office disaster. After that, no-one wants to
work with him. Until he came up with the idea of ‘Golmaal’.

5. Dino Morea was the first choice for Tusshar Kapoor’s role.

Tusshar Kapoor’s character in Golmaal gets a separate fanbase. But that role was offered to Dino Morea who refused to play the mute characters.

Little you know that Rohit Shetty hated his directorial venture Golmaal Returns. He said that he found the Golmaal returns a mediocre movie.

But he loved the third installment of the Golmaal.

7. He will forever be indebted to Amitabh Bacchan.

However, Amitabh Bachchan did a cameo in his movie Bol Bachchan.

8. Flops and criticism don’t matter – and here’s why:

Rohit Shetty’s movies are always criticized for being insufferable, nonsensical, and heavily commercialized.

However, it didn’t affect the director’s mind even a little bit. He came up with statements like, “people need to stop expecting pasta at an Udipi restaurant.”

9. Rohit Shetty struggles to get this son admitted to the Oberoi International School in Mumbai.

10. Her mother is the stunt woman and second wife of MB Shetty

Rohit’s mother Ratna Shetty worked as a stunt woman in many
Bollywood films. She also worked as an action coordinator. She was the part of
movies like Afsana Dalwalo ka, Anth, and Daraar.

We know that Rohit Shetty has a passion for cars and he owns
many luxurious cars. But at the same time, his personal life is not in the
limelight. He is happily married to Maya Shetty who is a homemaker.

12. Rohit ironed Sarees of Tabu and work as a spot boy for Kajol

During the days of struggle, Rohit Shetty worked as spot boy
in many movies and he also ironed sarees of Tabu. After 22 years, he cast Tabu
in the Golmaal 4. He also worked with Kajol as a director in Dilwale.