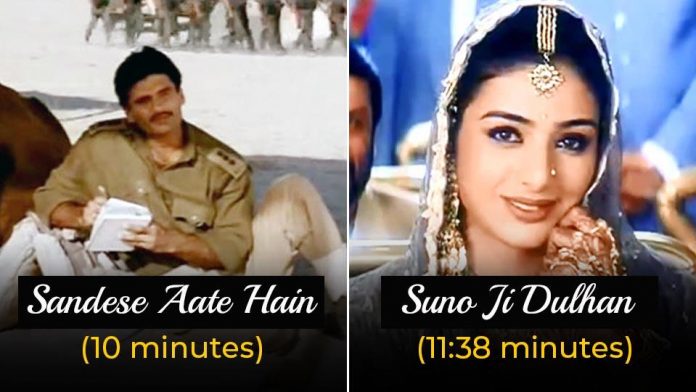 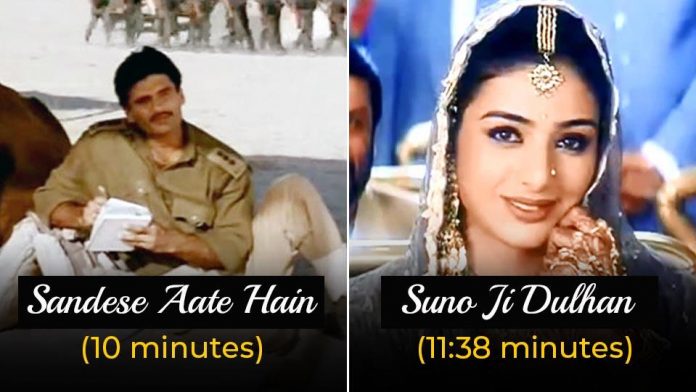 Bollywood movies are appreciated worldwide because of its melodious songs. Western directors are always keen to know how Bollywood manages to tell the story with songs.

For instance, there are Bollywood songs somehow fits the emotion and context of the scene.

Talking about it, Songs are the USP to sell movies to the Indian Audience. Usually, songs are 4-5 minutes long, but sometimes songwriters took it far and created songs of about 8-10 minutes.

Check out the list of these long songs in Bollywood movie with a reason why it was created this way.

Ab Tumhare Hawale Watan Saathiyo is the longes son in Bollywood with its 15 minutes of run time. The whole song was shot in bits and pieces with all different actors of the movie.

The song is filled with positive vibes for soldiers and inspires you to show patriotism.

Yash Raj Films is famous for its heart whelming music, and similar was seen in the Shah Rukh Khan starrer ‘Mohabbatein’. For the record, all the songs of Mohabbatein are longer than usual.

However, the Holi song ‘Soni Soni Ankhiyon Wali’ was the longest of all with the run time of 9.12 minutes.

The movies of Suraj Barjatya are melodious because the director is famous for adding some stories in the music album. There’s a proof of how Suraj Barjatya hooks you in his directorial movies.

The technique is simple as he uses a long song sequence to continue the story arc. You have doubt then watch the movie Hum Sath Sath Hai, especially the song Suno Ji Dulhan that briefs characters in the movie.

One of the best movies in Bollywood cinema that has set milestones was Dev Anand and Waheeda Rahman starrer Guide. The movie was based on the novel of R. K. Narayan by the same name.

In that era, Bollywood songs used to be long but this special song of Waheeda Rahman is 8.28 minutes long.

As stated earlier, Suraj Barjayta is more an album maker than a filmmaker. He used a long song sequence to plot the story and its characters.

For instance, the love blossom scene from the movie ‘Maine Pyaar Kiya’ is 8:24 minutes long. The song was Kabootar Ja Ja Ja which becomes the evergreen hit song in Bollywood.

Another entry of Suraj Barjatya and the second entry of the same movie, ‘Maine Pyar Kiya’. The whole sequence was the setup of Antakshari created with the popular Hindi songs.

You can see the whole family singing songs for the wholesome of 9:08 minutes screen time. Even when all the Antakshari songs are old songs, it is very delightful to watch them.

For the record, the Dhiktana Part 2 was 8:07 minutes long and you will see Salman Khan and Madhuri Dixit dancing throughout the song.

The recent addition to this list is from the movie Shaandar. The song Senti Wali Mental was 10:05 minutes long. Throughout the song, the lead actresses were dancing like crazy. The song featured Alia Bhatt and Sanah Kapoor.

The medley song, similar to Antakshary in the Suraj Barjatya movie ‘Maine Pyar Kiya’ was shot for Hrithik Roshan starrer Mujhse Dosti Karoge. Again, all the songs were used in the Medley were popular.

But it is fascinating to watch the song with the performance of lead actors Hrithik Roshan, Rani Mukerji, and Kareena Kapoor. The medley was 12:09 minutes long, but it worth your time.

The thrilling song ‘Sandese Aate Hai’ from Border was a
master song by Anu Malik. The song was written by Javed Akhtar. This 10-minute
long song seems short because of its melody.

The most popular qawwali song from 1958 released Al Hilal is
one of the longest songs in Bollywood history.