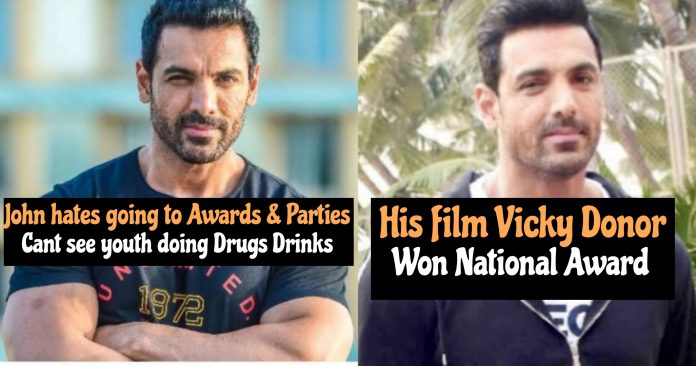 John Abraham also plays a negative character with the same charm and perfection as you can see in Dhoom and Race 2. Our friendly internet will give you too much information about John Abraham, about his life, about his work, and his career.

Here, we created a list of lesser-known facts about John Abraham that you might not aware of the actor.

1. John Abraham got his name from his father

There’s a trend to take your father’s name but you have to keep junior at the end. In John Abraham’s case, this name game comes as a twist.

The name of the actor is the reverse of his father’s name. Thus, the father’s name is Abraham John that was revered for the actor, John Abraham.

2. John conceptualized an idea for the cell phone game

Actor Producer John Abraham is not only blessed with good looks. The guy has a high functioning brain as well.

According to the sources, John has conceptualized a cell phone game during his high school studies. He named it Velocity, and later this game was programmed by a company named Small Devices.

3. John has all the essential quality of a supermodel

We all are huge fans of John Abraham’s look. Talking about his good looks, it is certified by a famous photographer Atul Kasbekar who once told John Abraham that if he cleaned up his face than he could make up be a combination of four supermodels.

5. John Abraham is down to earth celebrity because of his parents

There’s a say that a child learns a lot from his/her
parents. John Abraham is very modest and probably because his father used to
take a bus for travel and his mom travels by auto.

6. John Abraham is a successful producer

John Abraham is a wonderful actor, but he is also a
successful producer. His film Vicky Donor starring Ayushmann Khurrana and Yami
Gautam won the national award for being Best Popular Film providing popular
entertainment.

7. John Abraham is a Self-Made Star

John entered in Bollywood and become a star because of his acting skills and charming camera presence. He is a self-made star.

For instance, he bought his first bike when he was only 18 years old with his own money. The bike was Yamaha Re 350 for the price of 17,500 rupees.

8. John Abraham is a fitness freak

John Abraham spent quality time in gyms. He is an enthusiastic runner. He has won accolades and many prizes for 200 meters as well as 500-meter races.

He is one of the fittest actors in the Bollywood industry and an inspiration for young actors.

Actor John Abraham has a very good bond with his father Abraham John. His father was a cancer patient. Abraham John fought and survived the deadly disease.

This incident John often remembers and admires his father for this as well. In John’s word, “I learned a lot from my dad’s strength and my mother’s care.

John is one of the few well-educated celebrities in Bollywood. John has done graduation in Economics and also holds a degree Masters in Business Administration.

Since acting is separate from these academic degrees, it is still important to evaluate the characteristics.

11. John Abraham is a responsible man

Apart from his reel-life characters, the man is very firm with his own rules and guidelines. John avoids going to parties and dance clubs late at night.

He said he cannot bear the youth doing drinks and drugs in front of him. John also pays heavy donations without reveling it to media.

12. John Abraham is friends with star kids since childhood

This comes to you as a surprise but John Abraham was school
mate with Hrithik Roshan, Abhishek Bachchan, and Uday Chopra. They studied in
the same school named Bombay Scottish School.