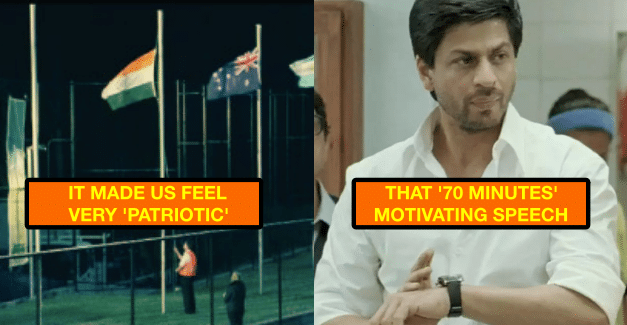 
Chak De !India is one of the memorable movie of the year . It’s been a blockbuster and can be seen as many times as possible . But do you know the key factors due to which it’s been the most successful one ?

We need to have some more remakes with the inspiration of movies like this .

Let’s see all the factors which made Chak De! India a real hit..

#1 Shah Rukh Khan’s portrayal of the strong and silent Kabir Khan was on point.

#2 The movie has all the considerations of women atheletes..

#3 The film cherishes the importance of the girl power .

#4 It showed about the leadership qualities as well .

#5 Without being patronizing, it spoke about issues very few people were talking about.

# 6 It made us feel very, very patriotic.

#7 It gave us some amazing dialogues and quotable quotes.

# 8 It taught us to just shake it off and do what you have to do.

# 9 The ultimate mantra to get success is only hard work .

This is how we found a great movie with all the efforts of the actors involved in it and creating an epic movie ..