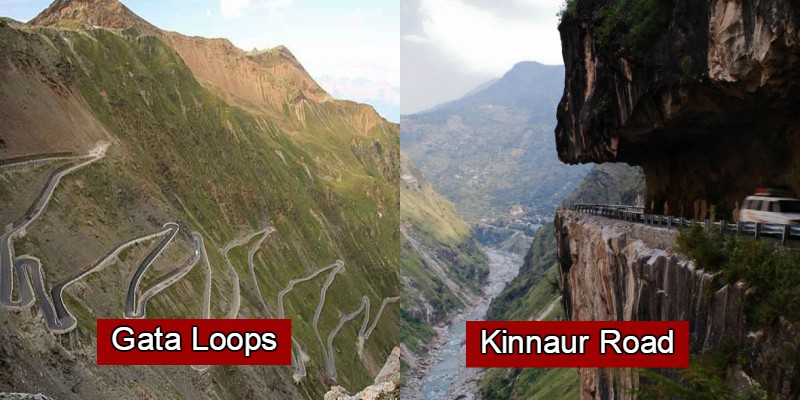 In the mood for a little adventure? Let us guide you in the right direction and offer a couple of choices.

The Bum La Pass is located about 37 kilometers away from Tawang in Arunachal Pradesh, at the Indo-China border 15,200 ft above sea level. The road to the pass  only allows certain vehicles, which are few in number. Unpredictable weather, snowstorms, blizzards and snow covered roads make driving extremely challenging.

One of the fiercest battles, Sino-Indian War took place here in 1962.  It is also referred to as the pass from where Dalai Lama entered India when he escaped from Tibet.

A special permit is required to visit Bum La Pass.The permits can be requested at the Office of the Deputy Commissioner in Tawang District and the same has to be stamped in the Tawang Indian army cantonment .

It is a high mountain pass elevated at 13,058 ft on the eastern Pir Panjal range of the Himalayas around 51 kilometers from Manali and it connects the Kullu Valley with the Lahaul and Spiti Valleys of Himachal Pradesh.

The pass is open from May to November as snowfall blocks the  road  in winter. Four years earlier, the state government started issuing permits online to limit the number of vehicles in this area. Permits are issued only to the first 800 petrol vehicles and 400 diesel vehicles.

Kolli Hills Road aka the road leading to the Mountain of  Death, is an extremely dangerous mountain road with a length of approximately 47 kilometers located in a small mountain range in in Namakkal district of Tamil Nadu. The road includes 70 continuous hairpin bends, which makes it popular with motorcyclists for that adrenaline rush.

In Kinnaur Valley, the roads are built by cutting the hills in such a manner that there are overhangs left at certain places. The road crisscrosses river Baspa in several places with small suspension bridges and is located in the Sangla Valley in Kinnaur district of Himachal Pradesh at an high altitude of around 4000 meters.

Chang La Pass is situated at an altitude of 5,360m above sea level in Ladakh and is the third highest motorable mountain pass in the world. It remains closed during the winter season because of the heavy snowfall it receives. There are two monasteries including the famous Tiger’s nose monastery located near it.

The Zoji La pass is at a dangerous elevation of 11,575ft above the sea level and links the Western Himalayan Mountain Ranges and Srinagar. It provides an important link between Ladakh and Kashmir and is is often closed during winter due to heavy snowfall.

This is another dangerous roadin the Western Himalayas in the Ladakh region of Jammu and Kashmir. It has a series of 22 hairpin bends with many twists, turns and narrows. It starts at 13,746ft and ends at 15,255ft.and is considered as one of the tourist attractions of the Leh Manali Highway. These loops are said to be haunted by the ghost of a dead trucker.