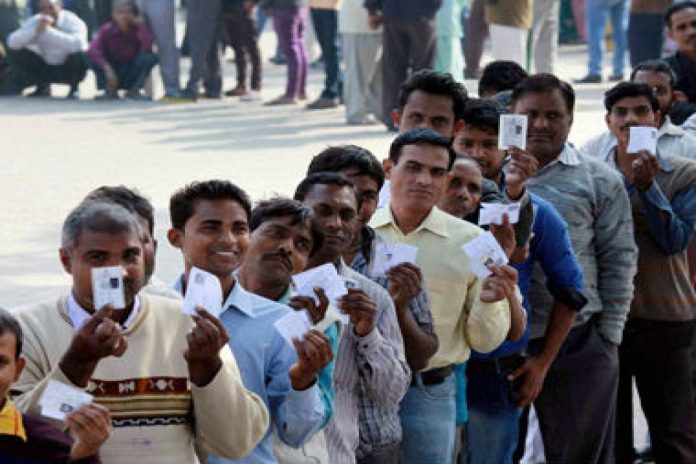 The declaration of the results for the Delhi Assembly Election is finally underway and AAP is leading in as many as 33 seat as per official EC website. After a highly polarized campaign that culminated with the polling of votes for all the 70 constituencies on the 8th February, the fate of Arvind Kejriwal’s Aam Aadmi Party and the Bharatiya Janata Party will be known by the end of the day. In this report, we shall focus on the results of the high profile constituencies in the Union Territory.

This Assembly Constituency has been the bastion of two Chief Ministers of the Union territory. Sheila Dixit, former CM of Delhi from the Congress party, won this constituency twice, 2008 and 2013. The current CM, Arvind Kejriwal, won from this constituency in 2015. Kejriwal is seeking reelection to the Assembly from the same seat.

The BJP and Congress, both, have fielded first-timers from the constituency. BJP’s Yuva unit President, Sunil Yadav, and Congress party’s Romesh Sabarwal, who is associated with the NSUI are up against the AAP Supremo.

AAP rebel Kapil Mishra is seeking an election to the Delhi Assembly from a BJP ticket. After a fallout with his erstwhile comrades, Mishra has opposed the AAP tooth and nail ever since. The AAP has renominated Akhilesh Pati Tripathi from the seat while the Congress has gone ahead with Akansha Ola, a secretary of the party’s women’s wing. The BJP won the seat only in 1993 while the Congress held it between 1998 and 2013. It flipped to the AAP in 2013.

BJP’s Kapil Mishra is currently leading with a close margin of less than 100 votes.

Alka Lamba, after having a fallout with the top brass of the Aam Aadmi Party, will now be contesting from the seat on a Congress ticket.  Meanwhile, Parlad Singh Sawhney, who had won the seat as a Congress candidate four times, contested the elections as the AAP candidate in 2020. The BJP has given its ticket to Suman Kumar Gupta. The constituency has a Muslim population of over 40 percent.

AAP’s Manish Sisodia is leading with just over 100 votes.

Controversial AAP leader Somnath Bharti is seeking reelection from this seat. From being accused of domestic violence and attempted murder to abusing a journalist in filthy language on camera and leading a midnight raid where a Ugandan woman was assaulted, Bharti, like a lot of AAP leaders, has a sketchy record.

After the BJP won the constituency in 1993, the constituency had been a Congress bastion between 1998 and 2013. In 2020, he is up against former councillor Shailendra Singh Moti of the BJP and Congress candidate Neetu Verma, a former DUSU president.

Amanatullah Khan, the AAP leader who was recently spotted leading anti-CAA riots in the national capital, is seeking reelection from the Muslim dominated seat. Okhla has never been won by a non-Muslim.

The BJP has fielded Braham Singh from the constituency. He was the BJP’s candidate in 2015 as well but had secured just over 23% of the votes last time. The Congress, meanwhile, has fielded Parvez Hashmi who has won the seat four times in the past. Shaheen Bagh, which has featured prominently in these election campaigns, lies in this constituency and so does Jamia.

Okhla is also the most controversial constituency in terms of anti-CAA riots recently. Shaheen Bagh, where Islamists have laid siege is also a part of the Okhla constituency. At Shaheen Bagh, 2 infants have died due to the protests and the harsh weather conditions and several hate-filled, anti-Hindu slogans like ‘Jinnah Wali Azadi’ have also been raised. The mastermind of Shaheen Bagh protests, Sharjeel Imam, is in police custody after he made seditious statements like trying to cut away Assam from the rest of India. In fact, Sharjeel Imam was seen making provocative statements at a separate event with AAP’s Amanatullah Khan standing right beside him.

Interestingly, even Batla House forms a part of Okhla constituency.

Official EC website does not have any initial trends on Okhla.

This is the constituency that had elected the now-disgraced AAP leader Jitendra Singh Tomar. The Delhi High Court had set aside the election of the ex-Delhi Law Minister for providing a false declaration regarding his educational qualifications in his nomination papers for the 2015 assembly elections. Tomar was sacked from his post of law minister from the Arvind Kejriwal led AAP govt in Delhi after he was arrested by Delhi police for procuring fake degrees.

This time around, AAP has given the ticket to Tomar’s wife, Preeti. The AAP candidate is up against Tilak Ram Gupta from the BJP and Kamal Kant Sharma of the Congress party. The BJP had won this seat in 2013 after the Congress won it twice, 2008 and 2013. In 1993 and 1998, the BJP had won this seat. This is the first election in 17 years that the BJP’s Nand Kishore Garg and Congress’ Anil Bhardwaj did not face off against each other.

Controversial AAP leader Atishi Marlena is contesting the elections from this seat. In the 2019 Lok Sabha Elections, she had suffered a spectacular defeat against former Indian cricketer Gautam Gambhir who had contested from a BJP ticket.

In the 2020 Assembly Elections, Marlena is up against BJP’s Dharamveer Singh and Shivani Chopra from the Congress party. Between 1998 and 2013, the constituency was a Congress bastion. In 2013, the BJP had managed to win the seat after 20 years. In 2015, the seat was won by AAP’s Avtar Singh.

AAP’s Atishi is currently trailing as per official ECI website.

Raghav Chaddha, another prominent face of the Aam Aadmi Party, is contesting the elections from Rajendra Nagar. In 2015, Vijender Garg Vijay of the AAP had won the seat. Two years earlier, the BJP had won it in 2013. The BJP has won the seat thrice prior to that, in 1993, 1998 and 2003. The Congress had won this seat in 2008. In 2020, Chaddha is up against veteran Sikh leader from the BJP, RP Singh, and Congress’ Rocky Tuseed.

Seelampur is an Assembly seat in the North-East district of Delhi and a Muslim dominated neighbourhood. The area was set up in the Emergency-era to rehabilitate Muslims rendered homeless after their homes were demolished in the north and central Delhi.

In the run-up to the Delhi Assembly polls, Muslim-dominated areas of Seelampur saw unprecedented violence led by Muslim mobs to protest against the Citizenship Amendment Act.

Delhi was the epicentre of the anti-CAA riots, which later spread to different parts of the country. The Muslim mob in Delhi’s Seelampur had unleashed the violence against public infrastructure and pelted stones at the police injuring many of them. The violent protestors had even attacked school buses in Delhi’s Seelampur area.

There have been serious allegations against Delhi Chief Minister Arvind Kejriwal-led AAP for instigating riots in Delhi by inciting Muslim mobs against the Modi government ahead of the Delhi assembly elections under the guise of protesting against the Citizenship Amendment Act, which has nothing to do with Indian Muslims.

Shockingly, Aam Aadmi Party led by Arvind Kejriwal has given tickets to people who are associated with instigating riots in Delhi during the anti-CAA riots. AAP has fielded Abdul Rehman to contest from New Delhi’s Seelampur constituency in upcoming elections. Rehman along with ex-Congress MLA Mateen Ahmed has been named in an FIR by Delhi Police for ‘provoking the crowd’ to join the protests.

Official EC website does not have any initial trends updates on Seelampur constituency yet.