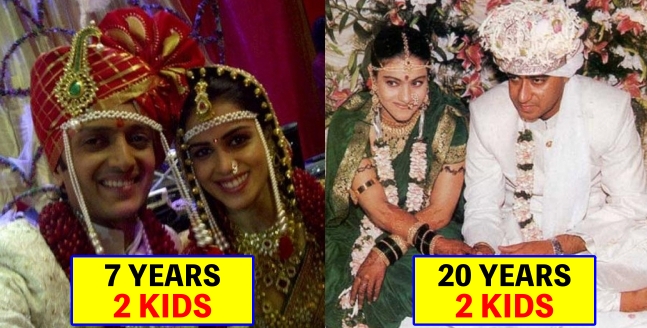 Marriages are made in heaven, and it holds true for some of our B-town celebrities whose relationships have stood the test of time.

In an era when marriages last anywhere between 72 hours to few months, some of these couples have shown us how it’s done!

Here are 10 such longstanding couples of Bollywood:

The couple got married in 2007. There’s not even a single news of any fight between them. They also have a beautiful daughter Aaradhya Bachchan.

What do you say when an introvert boy falls head-over-heels for a completely extrovert and high-spirited girl? We call it “opposites attract.” And that’s what happened to Ajay Devgn and Kajol. Married in 1999, this happy couple is now the proud parents of two kids.

It came as a shock to the B-town when the ultimate Casanova of Bollywood, Mr. Khiladi tied the knot with Twinkle Khanna. They indeed gave birth to one of the most successful marriages of Bollywood which took place on 2001 and is still going stronger with every passing day.

Love blossomed between Amitabh and Jaya while shooting for the film Zanjeer. The much in love couple got married on June 3, 1973. Their 46 years of marriage is a proof that the strong marital bond can’t be broken easily!

Dharmendra found his dream girl in Hema. Their love blossomed on the sets of Tum Haseen Main Jawan. The much-in-love couple did not leave each other’s side and got hitched in 1980. And even after 39 years of marriage, their love is still growing with every passing year.

The couple was head over heels in love with each other and tied the knot in 1987. Despite all the calamities their love stood still and is growing with each passing day.

It was a love at first sight. During an interview Rajnikant proposed Latha and she said yes. The duo tied the knot in 1981 and their love is still growing strong.

The co-stars are not only loved on-screen but off-screen as well. Rishi and Neetu tied the knot in 1980 and even after 39 years of marriage, they look charming and very much in love.

Bollywood’s most beautiful and cutest looking couple, Riteish and Genelia, tied the knot on February 3, 2012. They made their debut together in 2003, in Tujhe Meri Kasam and soon fell in love. And, rest as we all know is history.

They got married in 1980 and after 3 decades of togetherness, Shotgun and his gorgeous wife are still going strong.