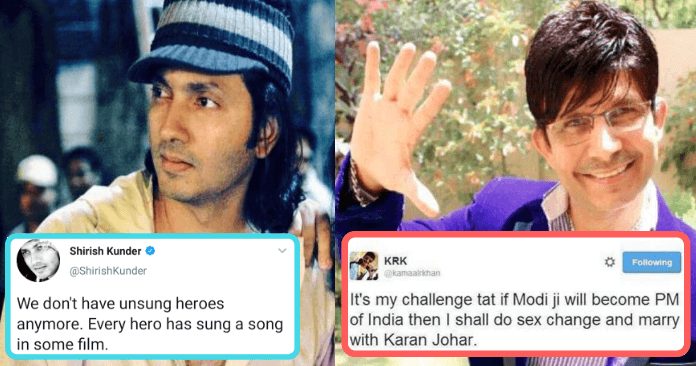 The Bollywood film industry evolved throughout time. Since
these actors are now gained worldwide fan following, they are expected to
behave gently while giving messages and talking to fans. However, the
introduction of social media has integrated the world and these Bollywood stars
can be seen interacting with fans quite often.

If this is not enough, you can see these stars posting jokes
and funny tweets every time. Sometimes these tweets are savage and wonderful
reply, but most of the time these are hilarious and make you laugh
uncontrollably. Today we enlist 10 funniest tweets of these celebs out of
hundreds of tweets to make your day special with a little laughter.

Rishi Kapoor becomes the media favorite because of his short temper and quirky replies to Medias. However, you will love this seasoned actor more when you know his other (funny) side too.

He twitted a meme about his song “Dhafli Wale Dafli bja” explaining that it means to mind your own business.

Shah Rukh Khan is introduced as the king of romance every time. However, this kind of romance has the funniest sense of humor as well.

You can see it on twitter when a fan asked him “Who is your favorite actor apart from Avram’s father?” He gave a tacky reply to that “Aryan’s father.”

Twitterati trolled Jacky Bhaghnani once on the twitter. Well… it was not for the tweet though, it was for English. Jackky tried to be funny on twitter but made blunder mistakes in English.

The tweet from Jackky was to appreciate Malala Yousafzai. But he misspelled the word twice. He wrote Masala instead of Malala, and price instead of Prize.

Uday Chopra might not get the desired success as a Bollywood actor, but he is quite active on social media. Uday Chopra is absent from the limelight of Bollywood for a long time but he attracts the media to himself by posting bizarre stuff.

Here’s the tweet he posted about knee and Gee. These are
some private jokes that would only be meant for him, I guess. Anyway, you can
see the Twitterati’s reaction to it.

Apart from being Khiladi Kumar’s wife, and writing a few cookbooks, Twinkle is also the center of social media’s attention. She is very active on twitter and often comes up with lame jokes on twitter.

For instance, a joke from her twitter handle is like, two people introduce themselves as Happy and Sad.

They clear that her name is Harpreet Singh, and the other
says his name is Satwinder Singh. These are the names Punjabi people choose for
their children.

Boman Irani has a great camera presence and we all know this. However, he has the same wittiest persona off-screen as well. You can see this on twitter when he tried to impress Twitterati with a hilarious joke.

He said He was very impressed with Twitter, and he would use it against his wife as whenever she wanted to say something he would say 140 characters or less.

Shirish Kunder’s tweet must be considered epic in the list of funniest tweets by Bollywood Celebs. He wrote how there are not any unsung heroes anymore in Bollywood.

He explained that almost every hero now sing and dance in Bollywood. Thus, there aren’t any unsung heroes anymore.

Poonam Pandey is one of the most controversial actresses due to her nasty social media posts. For instance, she got so much fan following only because of her social handles.

However, she crossed all limits of funniness with her twitter post. She asked whether it is okay to wear regular bra instead of a sports bra during workout sessions.

Salman Khan spent two days in Jodhpur Central Jail for killing two blackbucks. There’s also a case against him for killing a man who sleeps roadside.

Even in this situation and with such charges, Salman Khan tweeted that made people rolling with laughter.

He twitted that “The most heinous crime is killing an
innocent.” Out of nowhere without giving any context to why he is posting such
a thing. Well… he is Salman, “Dil me aate Hai, Samajh me nahi”.

KRK is famous for his twitter batter with many celebs. However, one post of him got attention as he wrote: “If Modi Ji will become prime minister then I shall do sex exchange and marry with Karan Johar.”