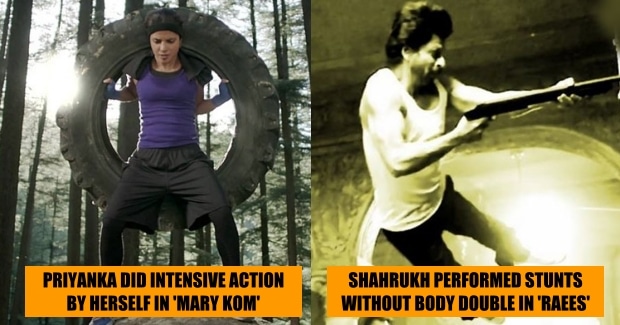 Bollywood masala films pack the perfect amount of action, stunts and fight sequences to make the audience whistle and cheer for their favourite action hero.

In this age of technology, when all the action sequences can be either performed by a double or can be rendered by computer graphics, there are few daredevils who prefer to perform it themselves.

Following is the list of actors who performed their own stunts:

The ‘Khiladi’ is famous for performing die-hard stunts without using any body double since a very long time in the industry. Kumar can be called as the stuntman of Bollywood. Akshay is known for such kinds of gripping stunts which gets the audience in tension. In Khiladi 420, he had jumped from a plane to a hot air balloon.

Heartthrob Hrithik Roshan is not just all about his Greek God looks. He is also incredibly fit and flexible and so he chooses to perform his own stunts whenever he gets an opportunity. Hrithik has performed stunts in movies like Krrish, Dhoom 2, Jodha Akbar, and even got injured while performing stunts for Bang Bang and Mohenjo Daro!

This actress is in the industry for more than a decade and has experience of all sort of movies. Katrina Kaif is extremely fit and instilled with quite a hard-working attitude due to which she has performed lots of action sequences without the help of anyone in movies like ‘Ek Tha Tiger’, ‘Tiger Zinda Hai’, ‘Phantom’ etc. We loved every minute of Katrina in her fierce avatar and can’t wait to see more of her in action roles.

Amitabh Bachchan was called the angry young man and was the most iconic action hero of Bollywood in the ‘70s. He often performed his own action sequences and once even got critically injured while filming a scene for Coolie 1983 for which he was hospitalized.

The ‘Badshah’ of Bollywood has been doing all kinds of movies. In his movie ‘Raees’ the actor performed his stunts without using a body double and in fact what was more surprising is that he did it without any safety equipment. His stunt in Don 2 was talked about for a long time.

Glamour queen Priyanka Chopra is a refreshing addition to this list as she breaks the stereotypes associated with women performing stunts. She proved her fierce side in movies such as Mary Kom and Jai Gangajal and had carried on the fire to her show Quantico.

Did you see this actress performing the action stunts in ‘Baaghi’ even though she had almost no time to prepare for it? But she did that. She performed a gravity-defying stunt from the 34th floor of a five-star hotel for her Lakme advertisement.

Taapsee might still be making a name for herself in the industry but her brief role in ‘Baby’ impressed everyone, especially her hand to hand combat scene. She even learnt judo, MMA, and Krav Maga for her role in the ‘Baby’ spinoff ‘Naam Shabana’.

Tiger Shroff has, in a very short amount of time, established himself as an action hero. He is a trained martial artist and also an extremely fit gymnast. He is one actor who always likes to challenge himself with intense stunts. His stunts in Baaghi 2 have stolen the limelight and have left his fans super impressed.