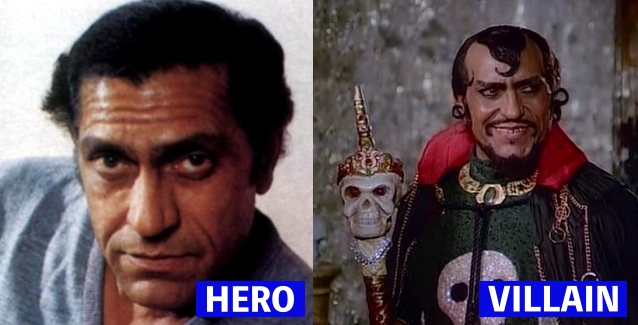 The protagonist isn’t a hero until he faces a villain. While we know Bollywood’s hero and appreciate them, we also remember the villains. Most of the time they are underrated. They are hated, shown disgust but yet unforgettable.

Afterall, what is Bollywood without its famous villains?!

I still remember my first brush with villainy – Amrish Puri in Karan Arjun. He killed both the heroes within the first 15 minutes of the movie, and what I felt for him was hate in its purest form. However, over the years I’ve grown more and more fond of the negative characters. Today I see the brilliance of Thakur Durjan Singh.

Here’s a list of films where the Durjan Singh of the movie has captured our imagination more than mere Karan Arjun:

Gabbar Singh is the best villain Bollywood has ever produced. Amjad Khan totally stole the show in the movie with his spine chilling performance. No one can forget Gabbar ever, especially his laugh which was hell scary!

In Omkara (inspired by Shakespeare”s Othello) directed by Vishal Bhardwaj, Saif gave a career best performance as Langda Tyagi. Traits of jealousy and wickedness in his character made him a typically cold-hearted villain. It was a performance that gave Saif’s career a make over. Suddenly the prince had become a nawab. Rave reviews aside, his edgy portrayal also got him his first Filmfare award.

Speak about Amrish Puri and the first character that strikes your mind is that of the invincible Mogambo. Amrish Puri sent shivers down the spine with his husky masculine voice, horrifying appearance, sadistic nature and fierce eyes. Amrish Puri, undoubtedly made this one of the most unforgettable character in Indian cinema with the way he portrayed the character of Mogambo. We simply love to hate Mogambo even today

Nawazuddin Siddiqui was seen in the movie Gangs of Wasseypur in the lead role as Faisal Khan. Still new to Bollywood, Nawaz handled the guns like a natural for his gangster role in this movie. He perfected his demeanor, accent and dialogue delivery to win over the audience. He gave a brilliant performance in the movie and was undoubtedly the best choice for the role of Faisal khan. He owned an unmissable aura around his character in the movie.

Twenty two years ago, it was the role of gangster Bhiku Mhatre which proved be Manoj’s claim to fame. The actor bagged accolades for his performance and the rest is history. The film revolved around and was named after the lead character Satya, but it was clearly a #win for Manoj.

Sanjay as Kancha was totally the most scariest bad man. The gruesome and cruel yet intelligent portrayal of the villain was par excellence. It was not only praised by the critics but even the audience loved it and even do today. He personified the role as a real villain with an eye catching persona. Right from his bulked-up look to his dialogue delivery, everything Sanjay Dutt did made his negative role in the movie more authentic.

Kajol played the role of a villain in the movie Gupt. She was at the peak of her career and portraying a role like this only made her better. The character is similar to Rahul from Darr. Yes, she’s a stalker and a psychopath and kill people. Ah! such a maniacal female. Nevertheless, this character fetched Kajol the Filmfare award for best villain.

Ashutosh Rana successfully made his way from Television to films. He was so convincing as postman Gokul Pandit that he could scare anyone at that time and even today . Not to forget his scary character in Sangharsh. He totally scared the audience with his eunuch avatar and even today this picture will give you goosebumps. Hell scary!

High speed chases, extra-ordinary camera work and wizardly good technical effects, Dhoom was a refreshing change for the cinema goers. Dhoom, like Don showed the negative character in a cool avatar and was given more importance in the film than what people are used to. John Abraham fit in perfectly for the character. The laid back master planner, Dhoom was his film.

The concept of twins where one is good and the other, a villain, was quite a popular theme in the 90s Bollywood. So, Paresh Rawal played the role of Teja. He’s greedy to take over his lookalike brother’s property. But he also has small town dreams of going to London or opening a farm and bakery. All he wants is to be “Bread ka badshah and omlette ka raja.” Someone crowdfund his dream! I loved the cross mark on his cheek, which was his identity.