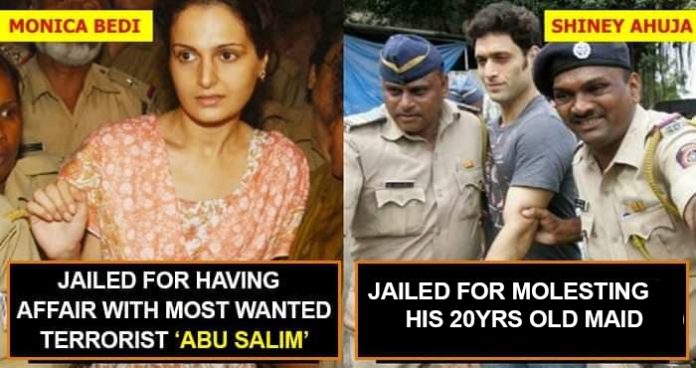 Bollywood Celebrities are often idolized for their positive appearances on screen. How they talk, how they walk become a holy grail for their fans. Yet again some of the Bollywood celebrities are not law-abiding citizens and even had to go to jail for their crime. While their on-screen avatars were praised by many, they could not hold the same image in their off-screen life.

These are the 10 Bollywood celebs who got into wrongful circumstances.

We all know about his case more or less after the Bio-pic Sanju had released. Sanjay Dutt always led to a controversial life. He was accused of being related with a big crime scene, Mumbai serial blast. The actor was arrested under the arms act and convicted for owning weapons illegally in a case that was related to the 1993 serial blast in Mumbai where 257 people killed. Since 23 long years, he is in an on and off relationship with the prison till now.

Fardeen Khan had been arrested in 2001 for trying to buy cocaine in Juhu. The actor was arrested with 9gm cocaine with him along with drug peddler Nadir Karim Sheikh. However, the actor had confessed that he had consumed less than 1 mg and its proven truth on the court. Therefore, he was granted bail in 5 days. He also denied any further intentions of selling drugs and released after de-addiction treatment.

Shiney Ahuja’s accusation story was shocking to Bollywood.  Shiney was accused of raping his maid of 20 years in 2009. The charges were later retracted and Ahuja was released on bail.

One of the most talented actors of Bollywood, Nawazuddin Siddiqui was summoned by the Thane crime branch. Nawazuddin was investigated in the call detail records case. He has been accused by his wife that he allegedly spied on her call detail records by appointing a private detective. Nawaz’s wife charged him for keeping eye on her, contacts and whereabouts. Although, Nawazuddin denied it all.

Son of the filmmaker Mahesh Bhatt was is the connection with David Headley, who plotted another big crime scene in Mumbai, i.e., the 26/11 attacks. It led to a total investigation on him by anti-terror agencies.

A promising actress of Bollywood, Monica Bedi was arrested overseas. The actress had an affair with one of the most wanted terrorists in the world, Abu Salem. Both were caught in Portugal and Monica served in Portugal Jail for two years for forging her travel documents. While the actress got bail, her boyfriend is still rotting in prison.

This macho actor John Abraham also has a criminal record. John got arrested for rash driving which caused an accident by injuring two people. He got a jail sentence for 15 days. However, he was bailed for Rs. 1,500 for the accident.

Well, the list would not be fulfilled without mentioning “Mr Prem” of Bollywood. Salman Khan was accused for many criminal cases. From the killing of two black antelopes to the infamous “hit and run” case, Salman Khan had to visit the police station and court several times.

As the French novelist and playwriter, Honoré de Balzac said, “Behind every great fortune there is a crime”.  It seems fortune is possessed by the famous and rich, as is the crime, which often tends to take them in its grasp, whether intentionally or unintentionally.